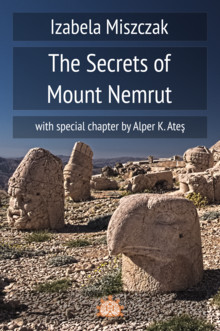 Turkish Archaeological News team proudly presents a new book devoted to Mount Nemrut National Park, loaded with fascinating facts, colourful photos, graphics, and plans. This book offers you a unique chance to discover the secrets of the long forgotten Kingdom of Commagene, its history and monuments. It is not only a history book but also a practical guidebook for everyone who wants to visit Eastern Turkey and enjoy the sunset in the company of monumental statues that have decorated the peak of Mount Nemrut for two millennia. The book is now available on Amazon as a handy ebook, to take it with you wherever you want.

Tucked away in the mountains of eastern Turkey, Commagene was just one of the numerous Hellenistic-era states that appeared after the short-lived empire of Alexander the Great collapsed and disappeared when the Roman Empire conquered Asia Minor. Commagene would be all but forgotten and only mentioned in history handbooks but for one fascinating detail - the monumental statues that one of Commagene's rulers had erected on the top of Mount Nemrut. Apparently a sign of this monarch's megalomania, the statues have survived and now lure the travellers with their mysterious history. Many a tourist saw the photos of this monument in the travel brochure or on a cover of a guidebook and decided on the spur of the moment to roam the vast distances of Turkey to witness the sunset and the sunrise in the company of these gigantic stone gods.

"The Secrets of Mount Nemrut" is a book devoted to the history of the small and seemingly insignificant Kingdom of Commagene and its preserved monuments. It has been written for all the travellers who are not satisfied with very brief descriptions of Mount Nemrut National Park provided by popular guidebooks. It is for the tourists whose aim is to learn about the cultural background of the places they visit, but also for armchair travellers and history lovers. It is also ideal for the readers who are interested with the history and monuments of the ancient Commagene Kingdom but have no budget nor time to purchase and get acquainted with the voluminous but pricey scholarly works devoted to this monument. While based on the scientific publications dedicated to Mount Nemrut, this book is written in a lighter style and it popularises the essential knowledge discovered about the mountain so far. The book also features a special chapter devoted to the mysterious Lion Relief from Mount Nemrut, written by Alper K. Ateş, the astronomer from ISTEK Belde Schools Science Center and Observatory.

The book describes not only the monuments of Mount Nemrut but also other historical sites situated in the area of Mount Nemrut National Park. We will look at splendid reliefs and inscriptions of Arsameia on the Nymphaios, cross the river following in the footsteps of Roman legionnaires setting out to conquer Parthia, and search for a burial chamber of a Commagene princess. Finally, we will invite you to explore the medieval fortress where the ghosts of the Mamluk soldiers might still lurk in the darker corners. The book starts with a brief historical background of the Commagene Kingdom, so you can get acquainted with who was who in this state. There is also a list of Commagene rulers, to be used as a handy reference. The next chapters present the sites of Mount Nemrut National Park, their history, archaeological research and, most importantly, the descriptions of the objects that can be seen there. These chapters are organised chronologically but can be read independently as a guidebook for particular sites. You will also find out that a sturdy ladder is as much an essential piece of an archaeologist's equipment as a trowel. The book offers some original insights and theories concerning the less-known reliefs of Mount Nemrut and the mysterious Lion Horoscope but leaves some questions unanswered as we are still waiting for the secrets of Mount Nemrut to be revealed by archaeologists. The final chapter provides practical information for the travellers in the region, including major transportation routes and accommodation tips. Finally, the readers will find suggestions of where to go and what to read next, if they feel they need to find out more about the Commagene Kingdom.

Izabela Miszczak is the publisher and editor of TurkishArchaeoNews.net website devoted to the cultural heritage of Asia Minor. She holds a master diploma in social sciences from the Faculty of Social Sciences, University of Silesia in Katowice, Poland, with the specialization in the sociology of culture. She has authored several publications in the area of political studies and social science. She also authored several travel guides in Polish and edits TurcjaWSandalach.pl portal for independent travelers.

Alper K. Ateş is the director of the ISTEK Belde Schools Science Center and Observatory and a part time faculty at Yeditepe University physics department in Istanbul, Turkey. He has a B.S. in physics, M.S. in computational physics and PhD on observational cosmology. He is currently involved in ground-based observations of Jupiter for NASA’s Juno mission. Ateş is the author of over 100 popular and professional articles and several books. In the near future he intends to expand his research towards archaeoastronomy by investigating numerous sites in Anatolia for clues on astronomical alignments and inspirations.