Gazi Mihal Mosque (tr. Gazi Mihal Cami) is just one of countless historic buildings of the former capital of the Ottoman Empire, Edirne. The mosque was built on the order of Gazi Mihal in 1422, as is stated on an inscription.

Originally, the mosque was part of a larger complex of buildings, which also included a soup kitchen and baths. The kitchen has not been preserved to our times, and the ruined remains of the baths are visible in the neighbourhood of the mosque. On the adjacent cemetery, there is the tomb of the founder of the mosque complex - Gazi Mihal Bey, a son or a grandson of the famous warrior Köse Mihal. According to some sources, this is the grave of Köse Mihal himself. However, it is highly improbable as he would have to live until the Ottoman conquest of Adrianople, living to a very old age. Therefore, we should presume that it is the grave of his grandson, who erected the mosque complex.

Mehmed Bey was born in a prominent Mihaloğlu family in the second half of the 14th century. He is best-known from his military achievements during the Ottoman Interregnum of 1402-1413, the stormy period of the Turkish history after the defeat of Sultan Bayezid I by the Central Asian warlord Timur the Lame at the Battle of Ankara. Bayezid's failure and subsequent death as the prisoner of Timur, left the young Ottoman Empire torn between his sons - Mehmed, İsa, Musa, Süleyman, and Mustafa, all of them bearing the nickname Çelebi.

Mihaloğlu Mehmed Bey first supported the Musa's claim to the Ottoman throne. He helped him capture Edirne from Süleyman and was granted the position of the Beylerbey of Rumelia as the reward. Apparently, he was not that grateful to provide Musa with further support as he defected to another brother, Mehmed, who controlled the territories of Asia Minor. The reasons for this surprising move remain unknown but he left Edirne rather suddenly with the best of his troops and was ferried over to Anatolia from Constantinople.

As the domestic war was coming to an end, Mihaloğlu Mehmed Bey helped Mehmed Çelebi by commanding his vanguard forces into battles. Musa was finally defeated and tried to flee, but he was taken prisoner by Mihaloğlu and his companions and promptly executed. In another surprising turn of action, Mihaloğlu Mehmed Bey was not rewarded by the victorious Ottoman prince who became Sultan Mehmed I. Instead, he was imprisoned in Tokat as a potential troublemaker and well-known traitor of Musa's cause.

When Sultan Mehmed died in 1421, his son and successor Murad II faced the rebellion of his one surviving uncle, Mustafa Çelebi. Mustafa had gathered a group of supporters from Rumelia, including Turahan Bey, who would later play an essential role in the campaign against the Crusade of Varna. Sultan Murad II needed to counterbalance the Rumelian beys and released Mihaloğlu Mehmed Bey from the prison. The armies of Mustafa and Murad finally met at Ulubad near Bursa. During a night attack on Mustafa's camp, the contender to the Ottoman throne fled across the Dardanelle. He wanted to get to Wallachia but only got as far as Edirne when he was recognised, arrested, and executed.

When his position as the sultan was secured, or so he thought at that time, Murad decided to turn against the Byzantine Empire or what was left of it. The siege of the city began on the 10th of June, 1422. The Ottoman forces were led in joint command by the sultan and Mihaloğlu Mehmed Bey. The vanguard under Mihaloğlu's command ravaged the suburbs, and then Murad himself arrived on the 20th of June, beginning the siege in earnest.

To defend the city, the Byzantines sponsored the rebellion of Küçük Mustafa - Murad's younger brother, supported by the Anatolian beys of Karaman and Germiyan. When Küçük Mustafa besieged Bursa, Murad had to lift off the siege of Constantinople. Mihaloğlu led the army against Küçük Mustafa and was killed during the fighting in Iznik in 1423. The mosque bearing his name is the most important memorial of Mihaloğlu Mehmed Bey in Edirne.

There is also the historic Gazi Mihal Bridge over the Tunca River that connected the mosque with the centre of Edirne, situated to the east of the river. Standing very close to the river, Gazi Mihal Mosque was seriously damaged by the flooding of Tunca in 1953. As a result, it was closed for worship for 45 years, until its restoration in 1998. 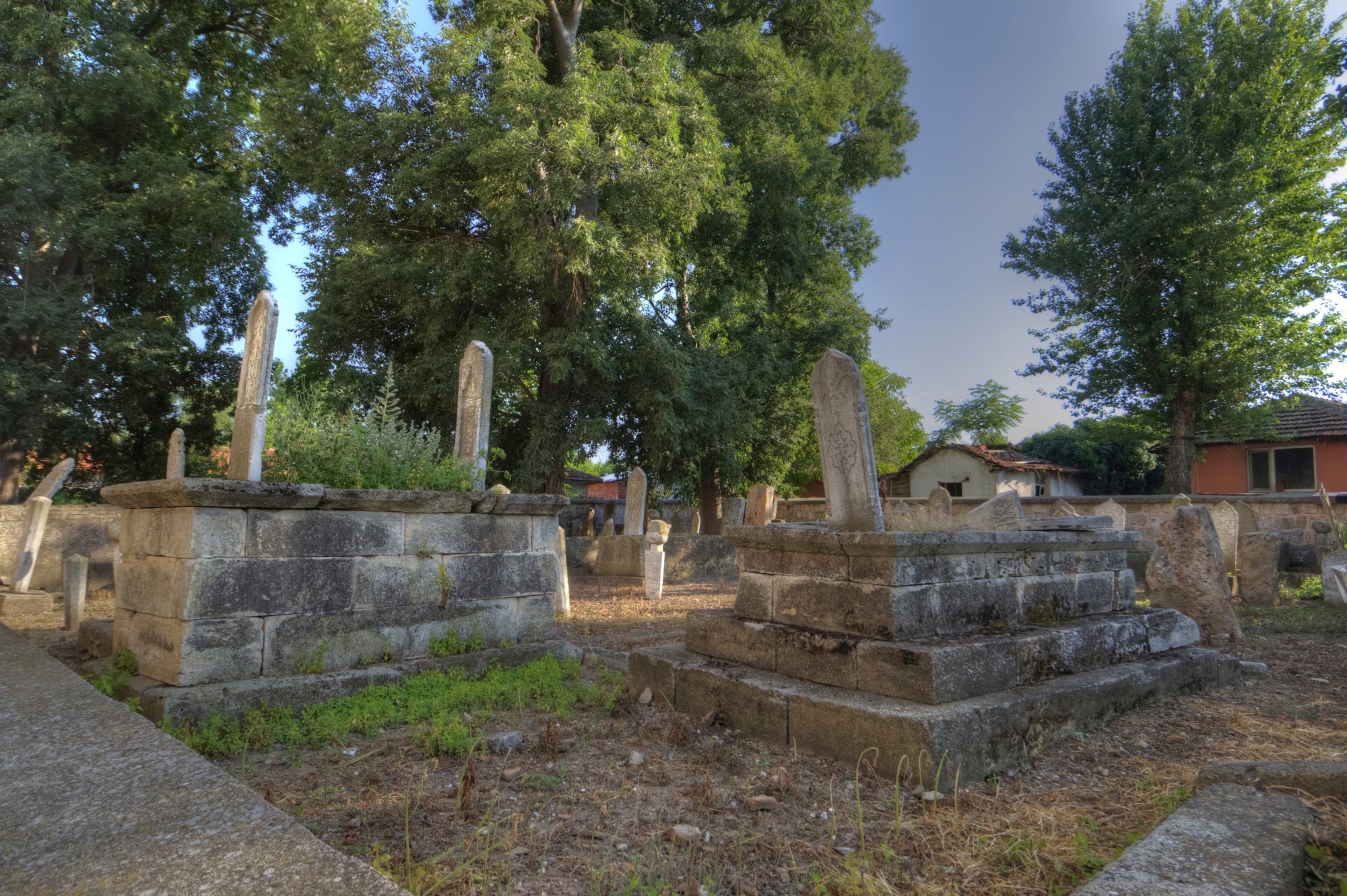 The mosque was erected from cut stones and bricks. There are no visible ornamentations on its outside walls, but the interchanging layers of light grey stones and red bricks create a pleasant decorative effect. There are faint traces of a painted blue and yellow ornamentation on the inside of the dome over the entrance. The wooden doors are set in a marble frame, surmounted by a pointed arch. There is an inscription in Arabic script over the doors. 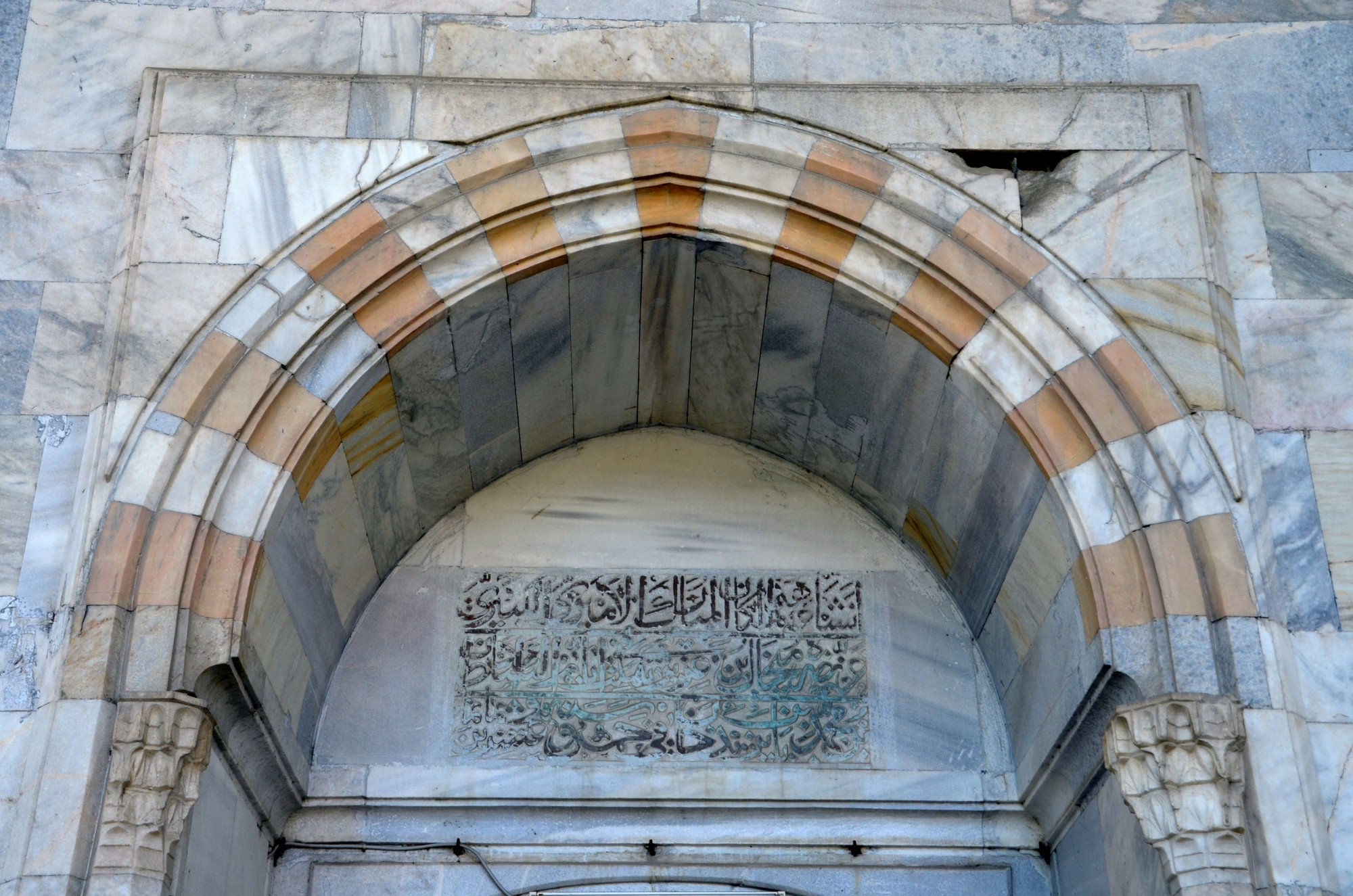 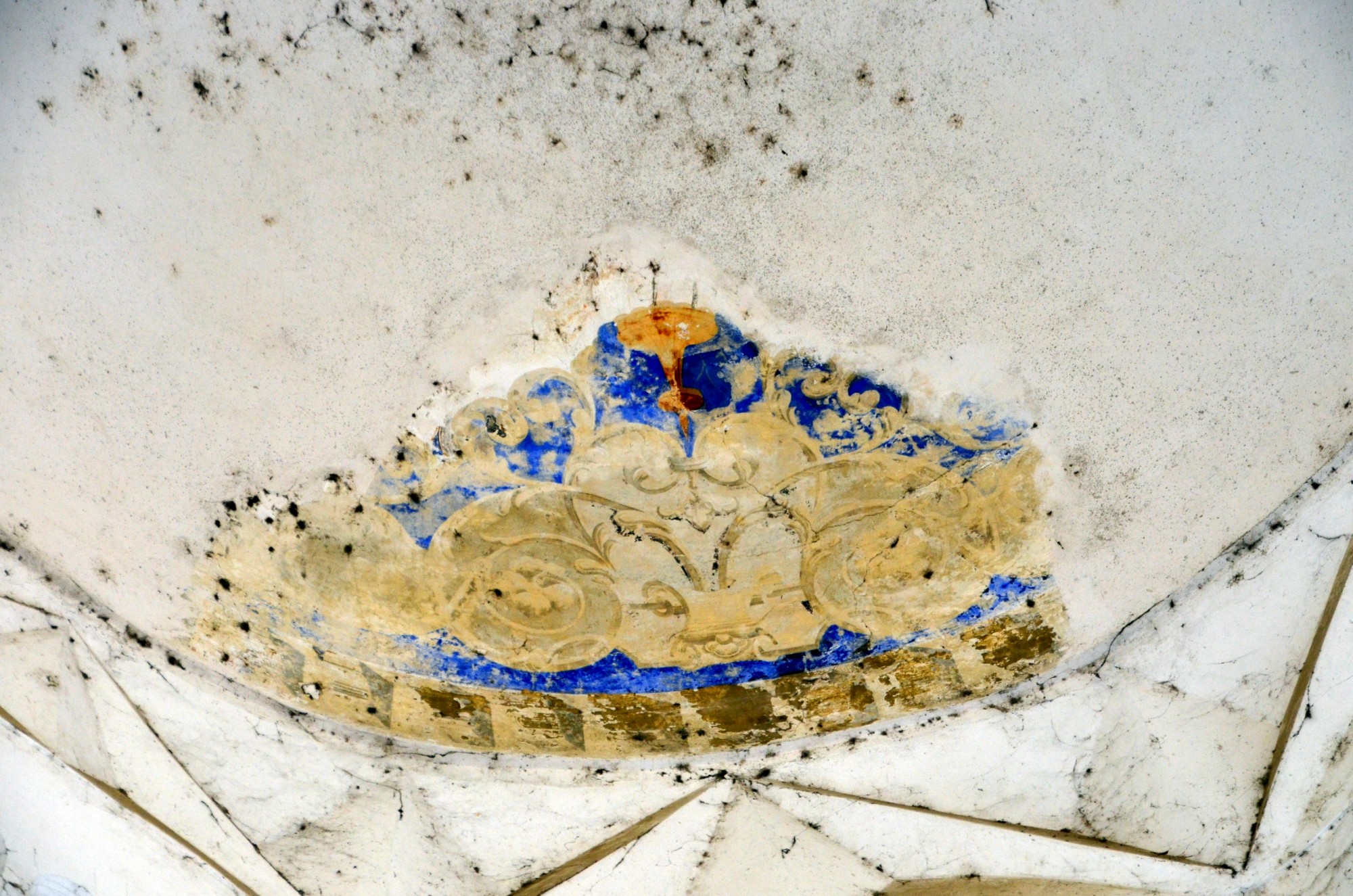 Architecturally, the building is an illustration of an axial-eyvan mosque kind. An eyvan is a characteristic element of the Islamic architecture. It is a rectangular room that has three walls and is open into the courtyard on one side. An eyvan usually serves as a monumental entrance to the sacred building. 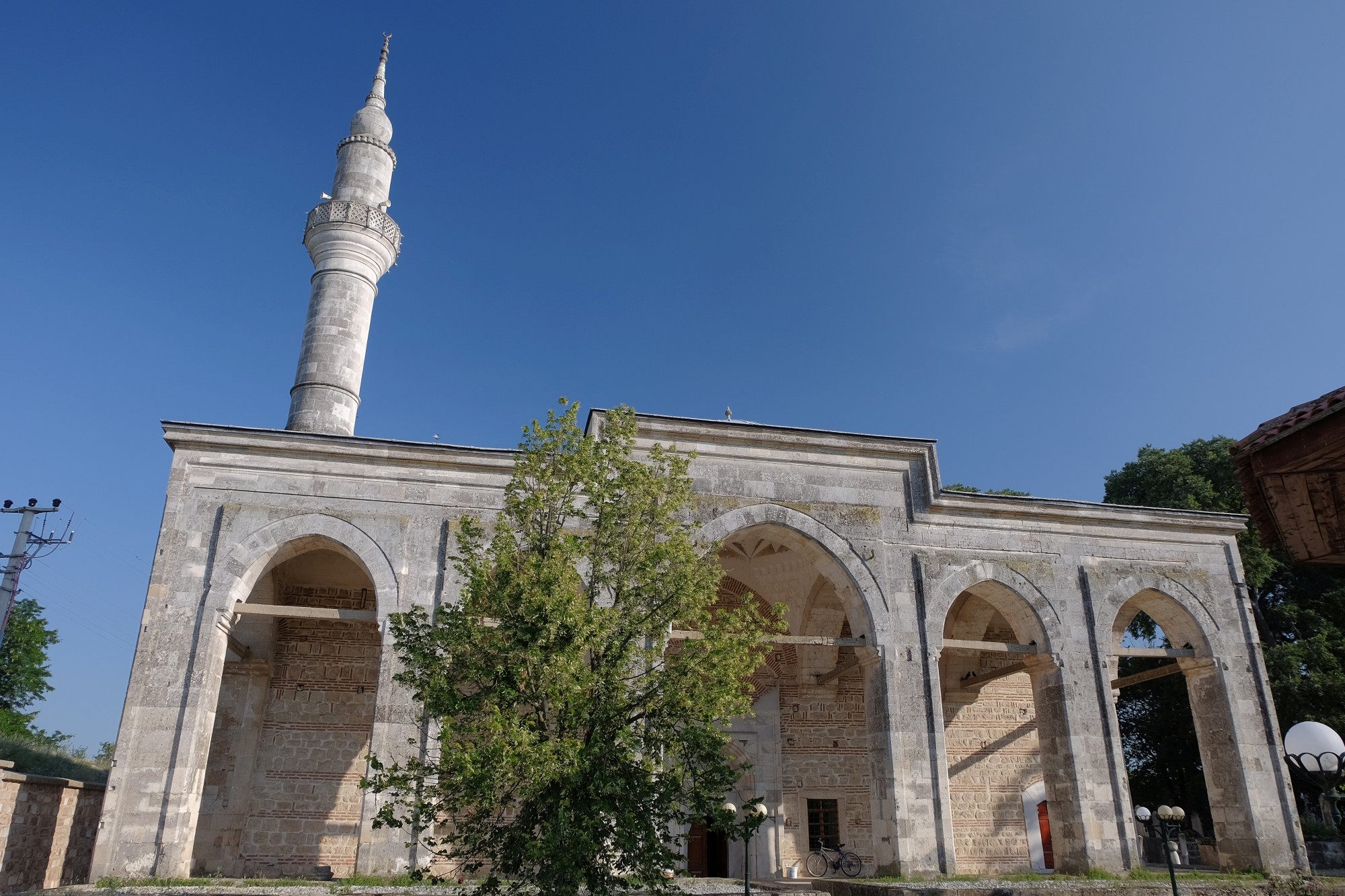 Two flanking rooms, which used to serve as dervish bedrooms, are covered with smaller ribbed domes. Originally, these chambers could be accessed from the central hall but now it is only possible to access them from the outside. The mosque has a single minaret with one balcony, located on its eastern side.

At the mosque, there is an extensive external courtyard adorned with a wooden ablution fountain. The whole complex is surrounded by a stone wall, and the entrance to the mosque is through a gate. The mosque is located below the current ground level, so to get to the gate, it is necessary to go down the stairs.

There is a fascinating cemetery at the back of the building. It contains almost 400 tombstones, dating back to the period from the 15th to early 20th century, some of them unique in Edirne area. There is also a rich collection of ﻿﻿Janisarry gravestones ﻿﻿with börk headgears. Börk was an Ottoman-era military hat, very high, with a holding place in front, called the kaşıklık, for a spoon. It symbolised the "brotherhood of the spoon" - a sense of comradeship among the Janissaries who ate, slept, fought and died together.

The tombstones from Gazi Mihal Mosque cemetery can be divided into two main categories: female and male. The female gravestones are mainly decorated with floral motifs: roses, life trees, date fruit, and grapes. The male gravestones are adorned with the symbols referring to the job of the person buried, and thus they provide the detailed information about occupations in Ottoman empire for about 400 years.

Gazi Mihal Baths (tr. Gazi Mihal Hamam) is also known as Old Dilapidated Baths (tr. Eski Harap Hamam). It is situated on the opposite bank of the Tunca River, next to Şahmelek Mosque. It is the oldest Turkish bath in the city, but, unfortunately, it has been abandoned and is now falling into ruins. There is an inscription giving the date of its construction - 1406. The founder was Gazi Mihal, the same nobleman who ordered the construction of the mosque and the bridge nearby. 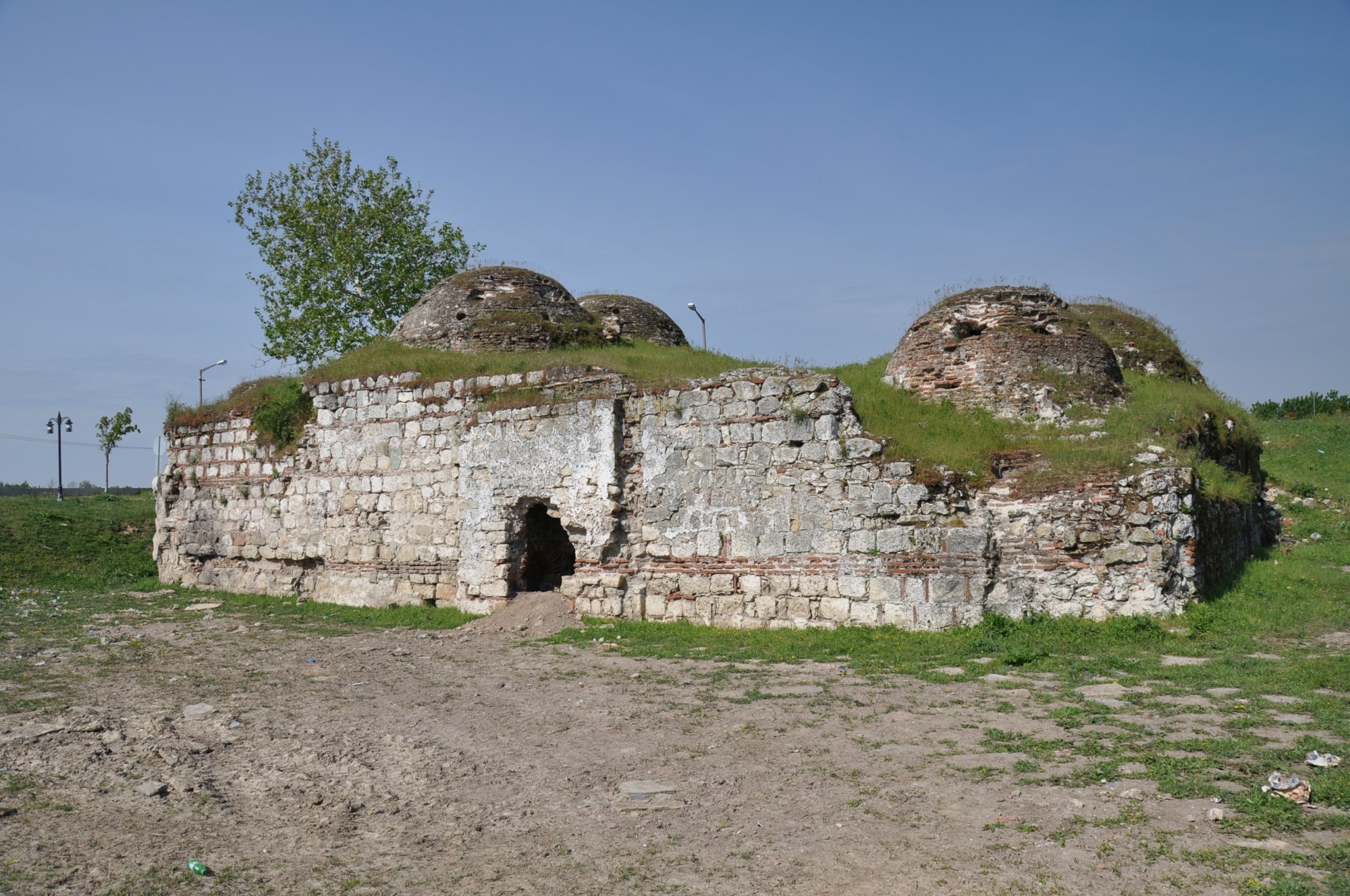 The mosque is usually locked, but it is possible to enter its courtyard and see the cemetery. Getting into the baths is impossible as they are completely ruined.

To get to Gazi Mihal Mosque and Baths follow the directions presented in the text about Gazi Mihal Bridge. The baths are situated on the eastern bank of the Tunca River, and the mosque - on its western bank.

A History of Ottoman Architecture
The Sons of Bayezid: Empire Building and Representation in the Ottoman Civil War of 1402-13
The Ottoman Empire, 1300-1650: The Structure of Power