The bay of Loryma, also known as Bozukkale, is located near the southern tip of the Bozburun Peninsula which extends about 34 km southwest of Marmaris. Its distance from the island and the city of Rhodes is only 22 km as the crow flies and in clear weather, the houses and harbour facilities of the city of Rhodes can be discerned in the distance even with the naked eye (Fig. 1). 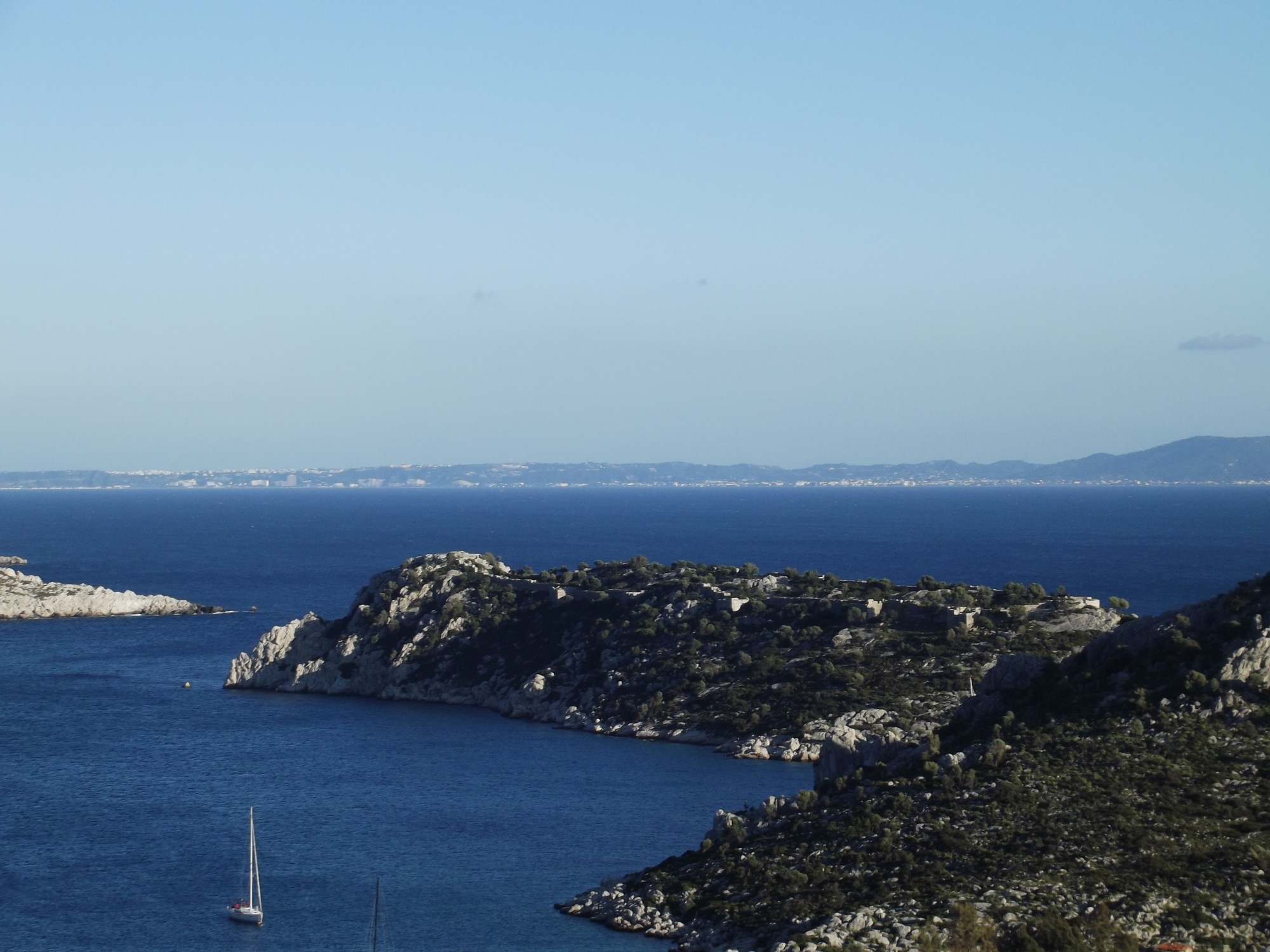 Fig. 1. View across the entrance and the Harbour Fortress of the bay of Loryma to Rhodes (in the background)

The bay of Loryma is one of the few large bays of the Loryma or Bozburun Peninsula which was known as the Carian Chersonese in antiquity. The clear blue watered bay is surrounded by sparsely wooded hills and mountains; in the north, they rise steeply from the shore. Only at the north-west end of the bay, there are three plains, one of which reaches quite far to the inland. As the mountains, the whole environment of the bay is characterized by little vegetation and bare rocks. By this and its secluded location, combined with the ruins and half wild goats and donkeys (Fig. 2), a certain idyll can be ascertained to the bay. Probably out of this reason, today the bay is also a popular destination of numerous sailing boats as well as a station of the “Blue Journey” called Gulet tours (Fig. 3). 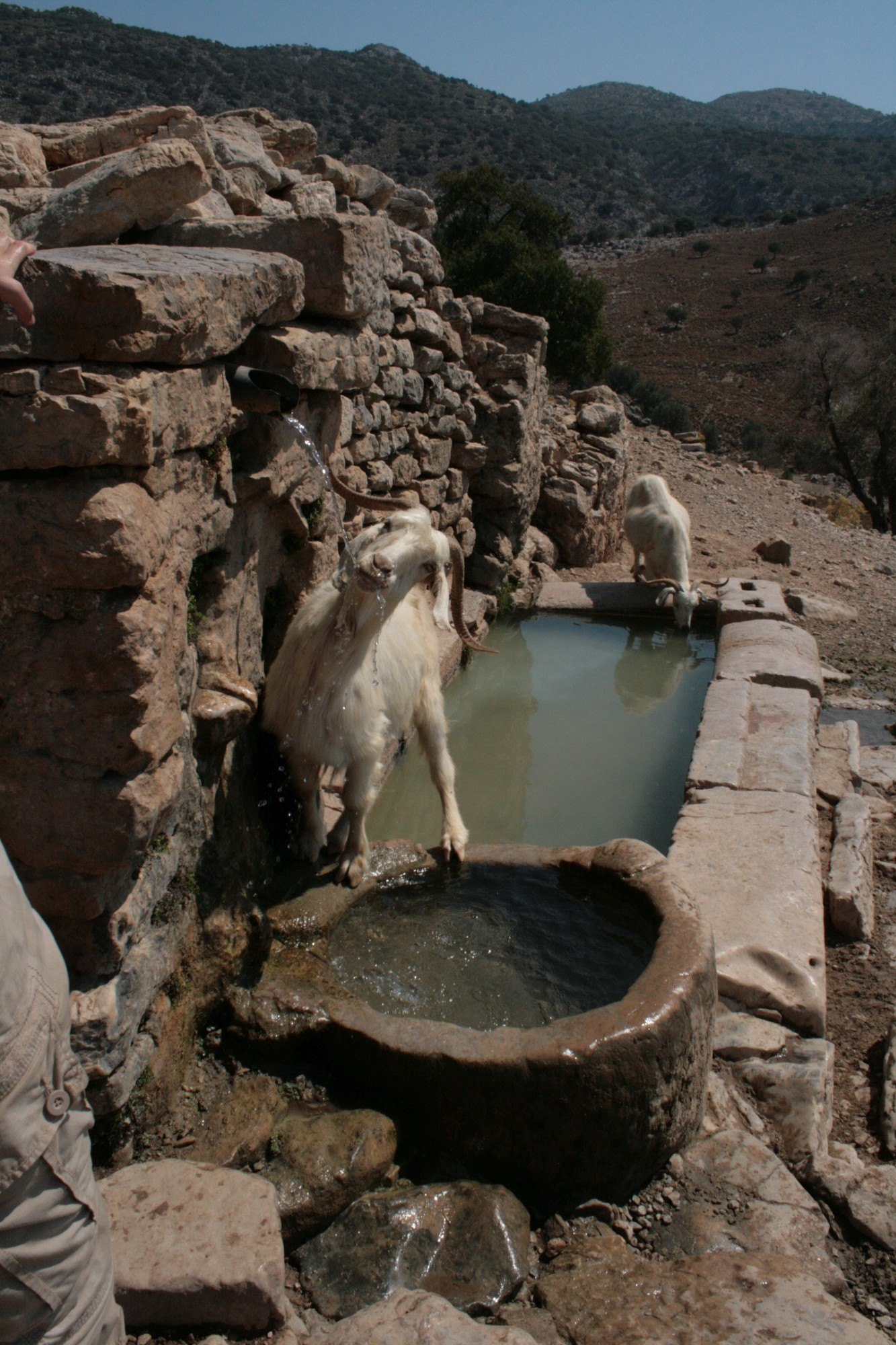 Fig. 2. Half-wild goats at a well that is made of spolia

Probably from the mid of 4th c. B.C. onwards – here, however, the researchers’ opinions differ – the peninsula has been the core of the Rhodian mainland property, the so-called Rhodian Pereia. Numerous inscriptions as well as ceramics, especially stamped amphora handles, bear witness to this. Due to the proximity to Rhodes, it can be assumed that in ancient times, the bay of Loryma (Bozukkale) has been of a certain importance for the Rhodians and their expansion to the mainland. In the area around the bay, there are numerous ancient testimonies, especially the ruins of the so-called Harbour Fortress from which the Turkish name of the bay (Bozukkale = broken castle) derives, and the eponymous settlement of Loryma.

The oldest traces of human presence in the bay of Loryma date back to Chalcolithic times (5,500–3,500 B.C.). From the Geometric age (900–700 B.C.) onwards, a permanent population developed slowly in the environment of the bay. Beginning in the 4th c. B.C., since its membership to Rhodes, the bay of Loryma and the whole peninsula experienced an economic boom which is confirmed by the archaeological findings, especially by that of ancient farmsteads.. During this time, the bay was home to a Rhodian naval base, probably in conjunction with an arsenal (Greek: ὁπλοθήκη). Its existence had until the 19th c. been preserved in the bay’s designation „Oplothiki“.

In the period from the 1st c. B.C. until the 4th c. A.D., the Loryma Peninsula appears to have been almost uninhabited. It is only in the Early Byzantine period, that temporary settlement takes place, as can be seen in the ruins in the bay as well as in its wider surroundings. In the Late Middle Ages, according to contemporary Portolan charts, there must have been a port of the naval power Amalfi in the bay since it appears in the Portolans as „Porto Malfetano“.

According to ancient sources, the bay of Loryma, the last port before reaching Cape Karaburun, the ancient Κυνός σῆμα, served several times as a gathering point for fleets. It is said that the following commanders gathered there their fleets: in 395 B.C., the Athenian general Konon (Diod. Sic. 14.83.4), in 305 B.C., the diadochus Demetrius I of Macedon, called Demetrius Poliorketes, before his siege attack on Rhodes (Diod. Sci. 20.82.4), in 190 B.C., a Roman fleet (Livy 37.17.8), in 42 B.C., the Roman senator Gaius Cassius Longinus (App. B. Civ. 4.72) and in 1522 A.D., sultan Suleiman I, called the Magnificent.

The bay of Loryma with its ancient testimonies only lately received attention by archaeological research. For the first time, the ruins in the bay were mentioned by William M. Leake in 1842 and by Ludwig Ross in 1852. Although both of them mentioned the ruins, they did not undertake any further archaeological investigations.

The first scientific research took place in the 1880s by the German archaeologists Otto Benndorf and Georg Niemann. They first drew a plan of the bay with the most important ruins on it (the so-called Harbour Fortress, the settlement of Loryma and the one on Asar Dağ).

At the beginning of the 20th c., the brothers Michalis and Nikitas Chaviaras who lived on the neighbouring island of Symi, as well as other researchers, especially from Great Britain, visited the bay of Loryma with the aim of finding ancient inscriptions.

However, the most extensive research took place at the end of the 20th c. The German archaeologist Winfried Held organized an intensive survey in the year 1995, and from 1999 to 2001 and by this, also investigated the ruins in the bay which have barely been built over since antiquity.

In the bay of Loryma, there are a lot of ancient ruins. The most important and easiest to discern are those of the so-called Harbour Fortress and the two settlements in Loryma and on Asar Dağ. 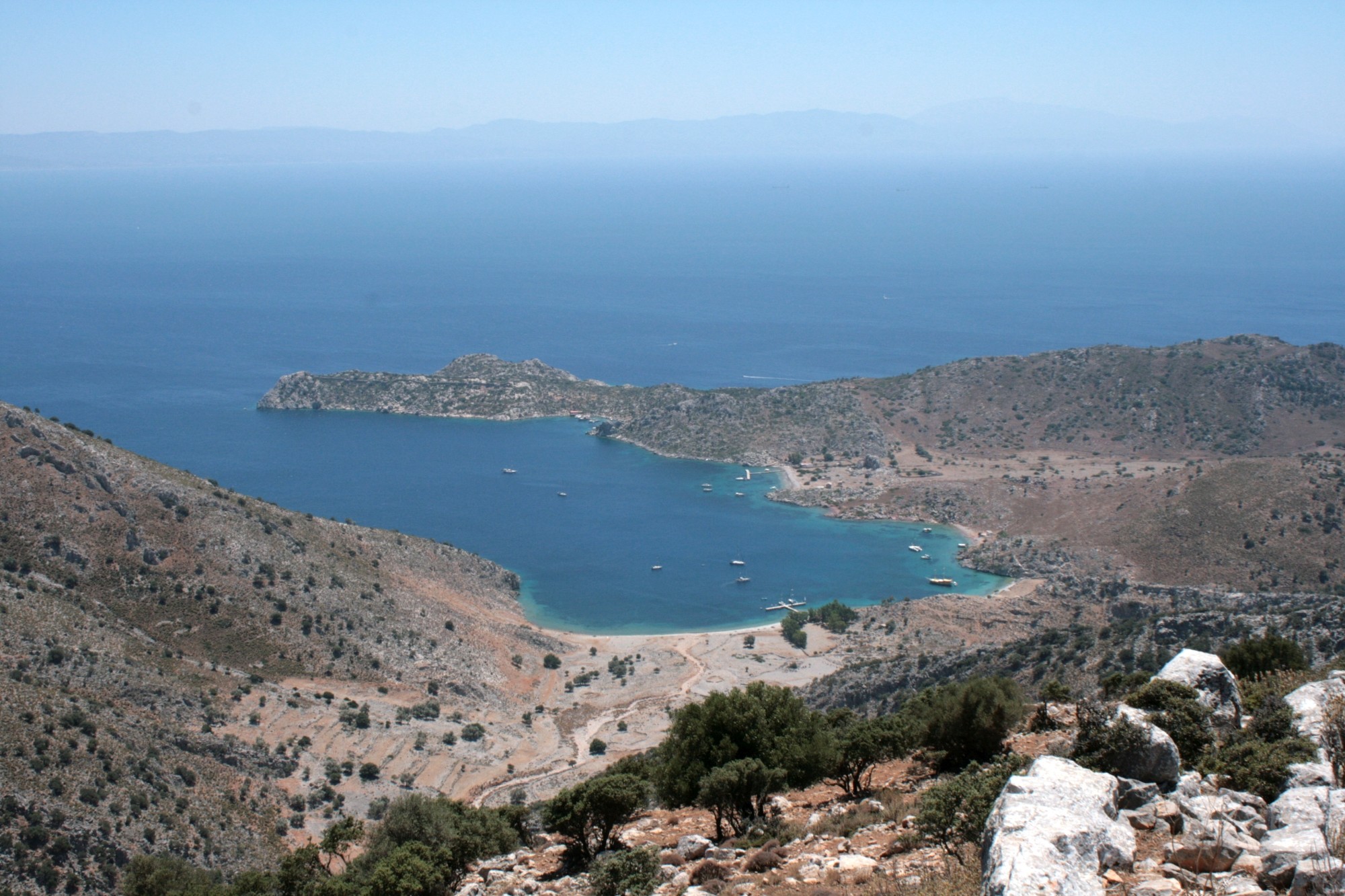 Fig. 4. View from Asar Dağ across the bay. In the middle, to the right of the entrance to the bay, is the Harbour Fortress located. In the background the shadowy figure of Rhodes

Harbour Fortress: The well-preserved ruins of the so-called Harbour Fortress are located on the southern shore of the bay of Loryma, just above its entrance (Fig 4). The approx. 334 m long and 36 m wide fortress has a circuit wall about 2.5 m thick which still stands up to a height of 6 m (Fig. 5). Along the defensive wall, there are 11 towers, including two circular ones, located at the western and eastern ends. All towers are provided with entrances at ground level. 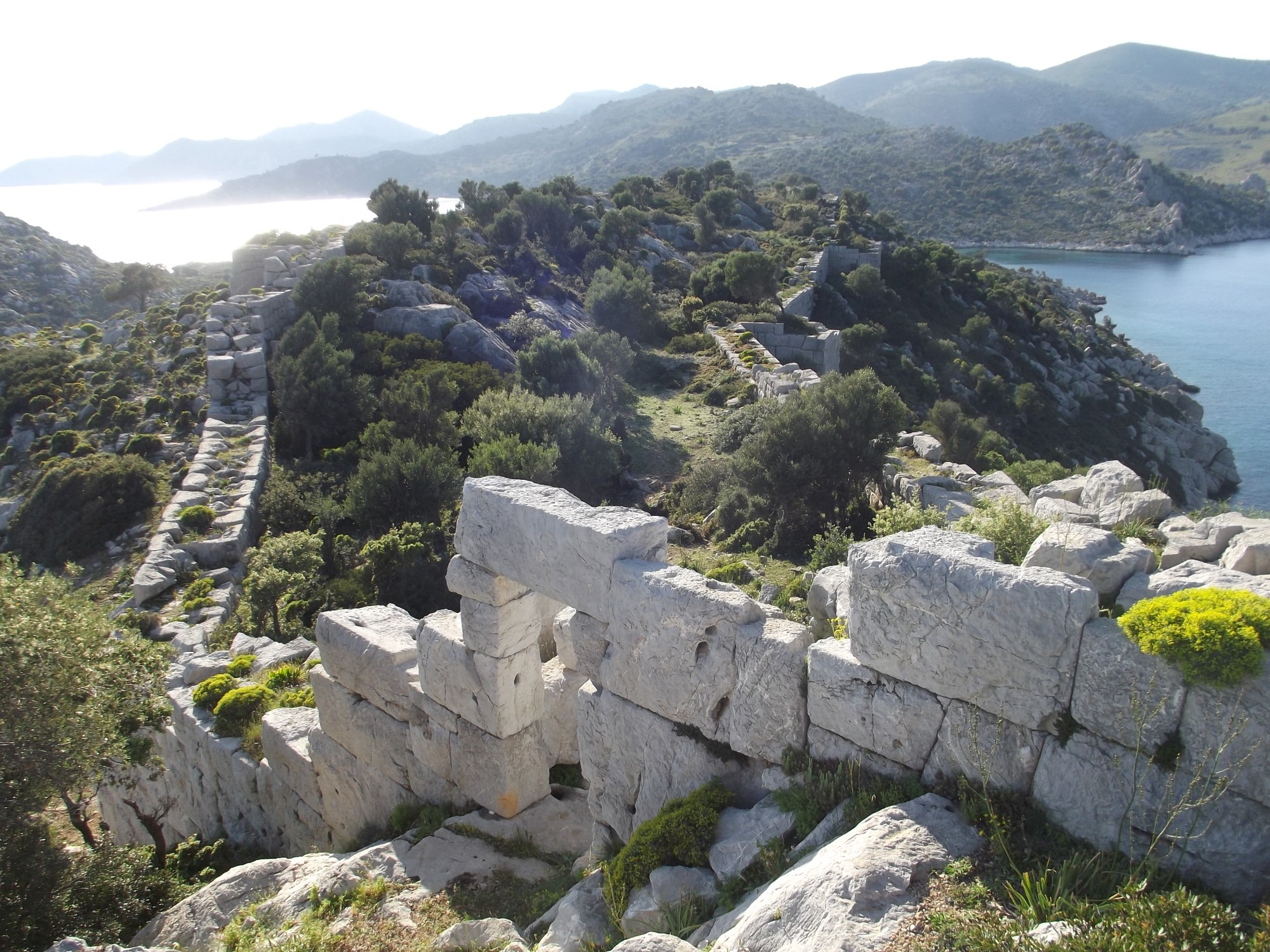 Fig. 5. View across the Harbour Fortress from the east, with the fully preserved door

With few exceptions, nearly every tower displays loop-holes, but only one of them, located at the northern side, has a “window”, reaching from floor to ceiling level (Fig. 6). In this tower, a catapult had probably been erected. Out of several posterns, only one in the southeast of the fortress has been fully preserved. The Harbour Fortress was probably built at the beginning of the 3rd c. B.C. on behalf of Rhodes which is indicated by some inscriptions inside and outside of the fortress. Only a few years before, Rhodes had overcome the siege by Demetrius Poliorcetes which had been started in 305/304 B.C. in the bay of Loryma. In the Early Byzantine Period, a three-naved, about 14 m long and 10 m wide basilica was built in the western part of the fortress. 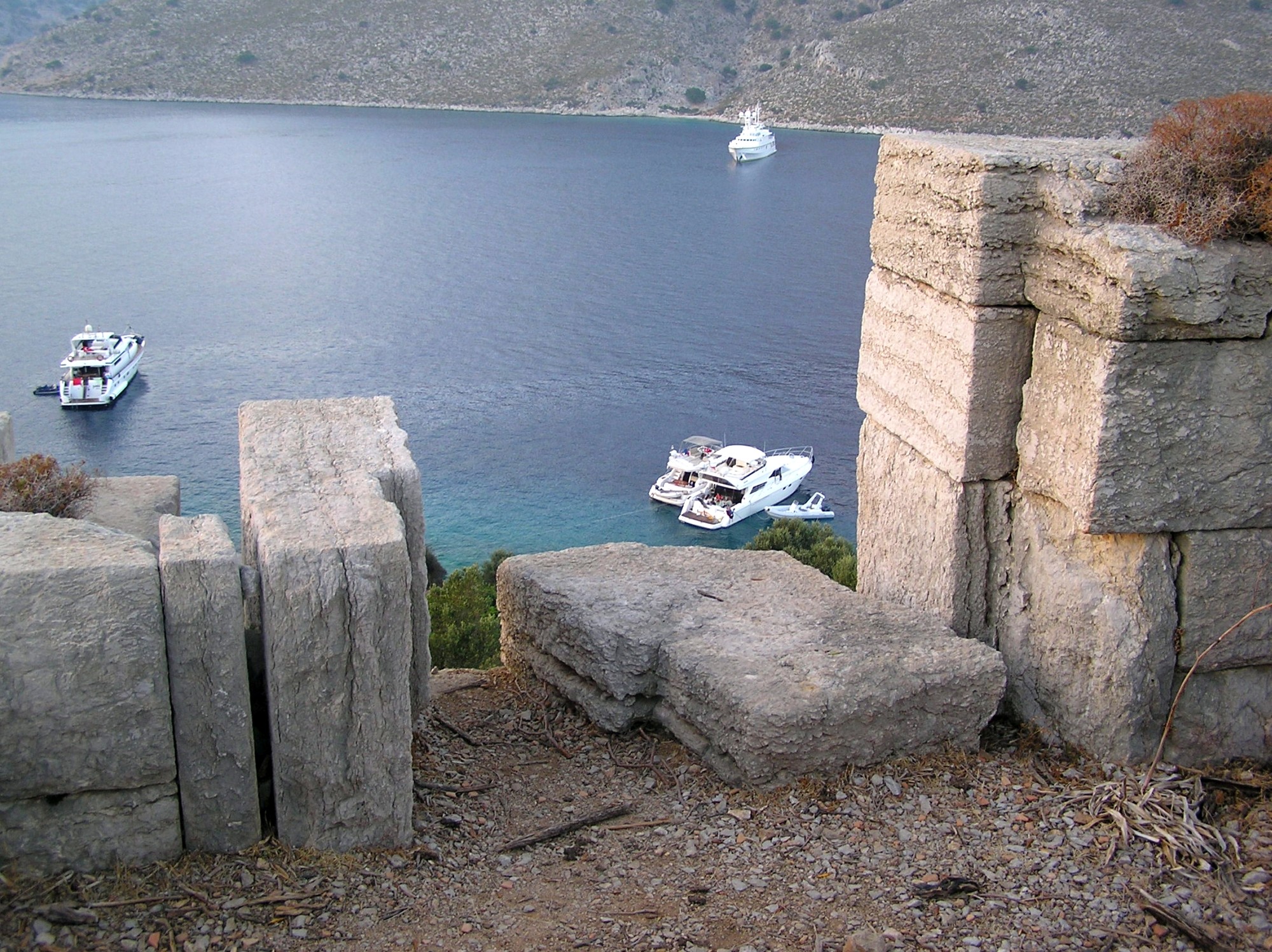 Fig. 6. 'Floor to ceiling window' in one of the Harbour Fortresses towers

Settlement of Loryma: The settlement is located on a flat hill at the northern end of the bay. In the north-west, it is surpassed by an acropolis hill (Fig. 7). The settlement is surrounded by a bivalve circuit wall which is still up to 2.5 m high and once had 6 posterns.

Fig. 7. View of the settlement of Loryma with circuit wall (right) and followed by the acropolis (left)

As additional defensive elements, there’s a tower on the north-eastern wall, being still about 3.5 m high (Fig. 8), and probably a bastion at the south-eastern corner. The circuit wall has two phases, an archaic and a classical one which can be distinguished by the masonry; the classical wall follows the course of the archaic one for the most part (Fig. 9). 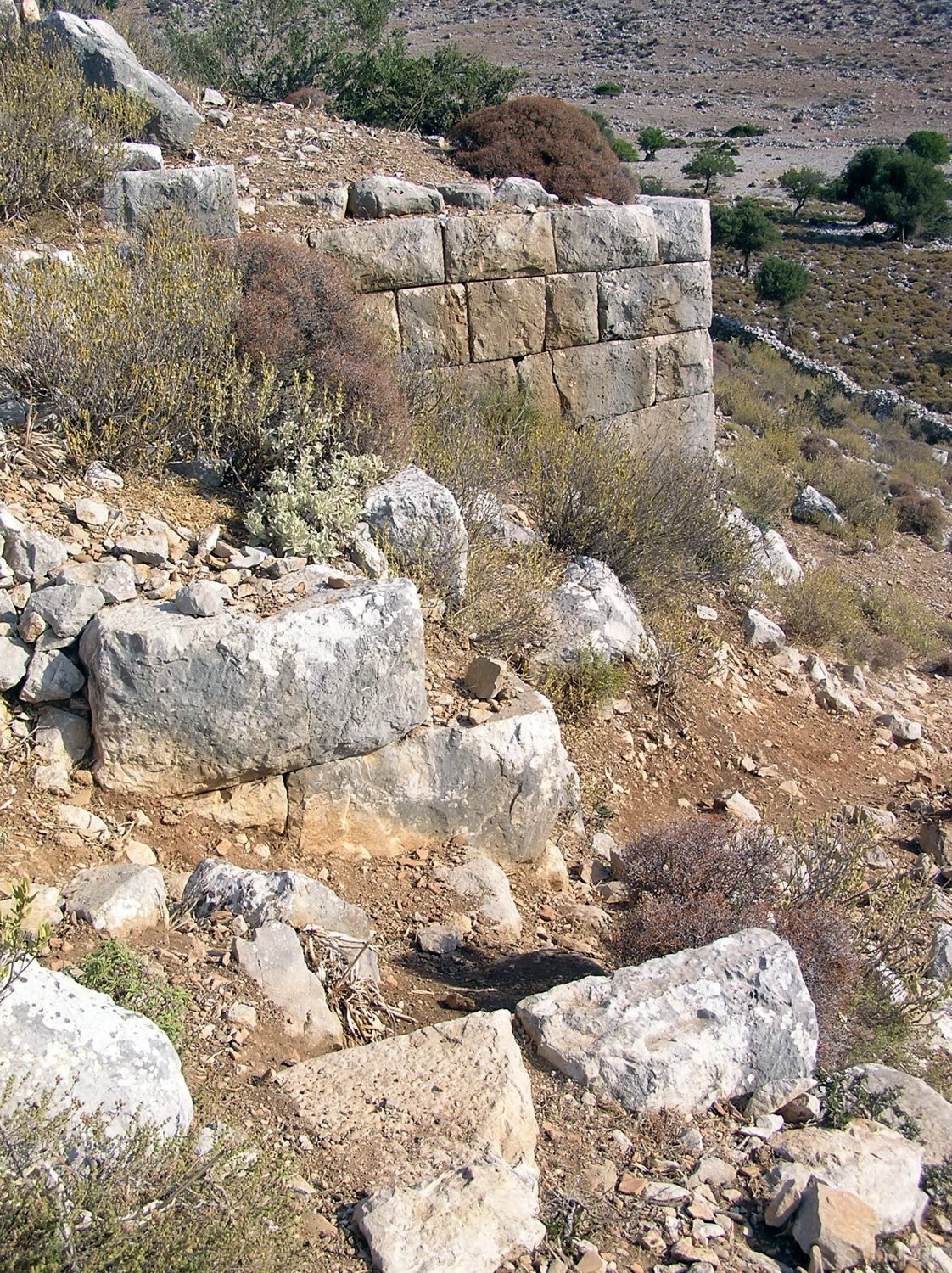 Fig. 8. Postern (foreground) and tower (background) at the north side of the settlement

Fig. 9. Detail of the circuit wall with part of the Archaic phase (background) and the Classical phase (foreground)

Within the settlement, traces of nearly 50 small dwellings have been found; in the centre, there was a small square where two public buildings possibly were located. The acropolis rising high above the settlement has its own fortification with two phases as well (Fig. 10).

Fig. 10. Part of the acropolis fortification which serves also as terrace wall

In the extreme north-west of the acropolis, a nearly rectangular plateau lies which is interpreted as a tower fundament, but this is debatable. Because of its masonry, it could have been built in Late Classical or Early Hellenistic times (Fig. 11).

Fig. 11. View from the acropolis across the bay with the Classical-Hellenistic Plateau in the foreground

Other findings: West to the settlement extends a necropolis. Here you can find numerous stepped bases, once bearing the funerary monuments (Fig. 12). They are typical for the Carian Chersonese. In the surroundings of the settlement, several sanctuaries can be identified. 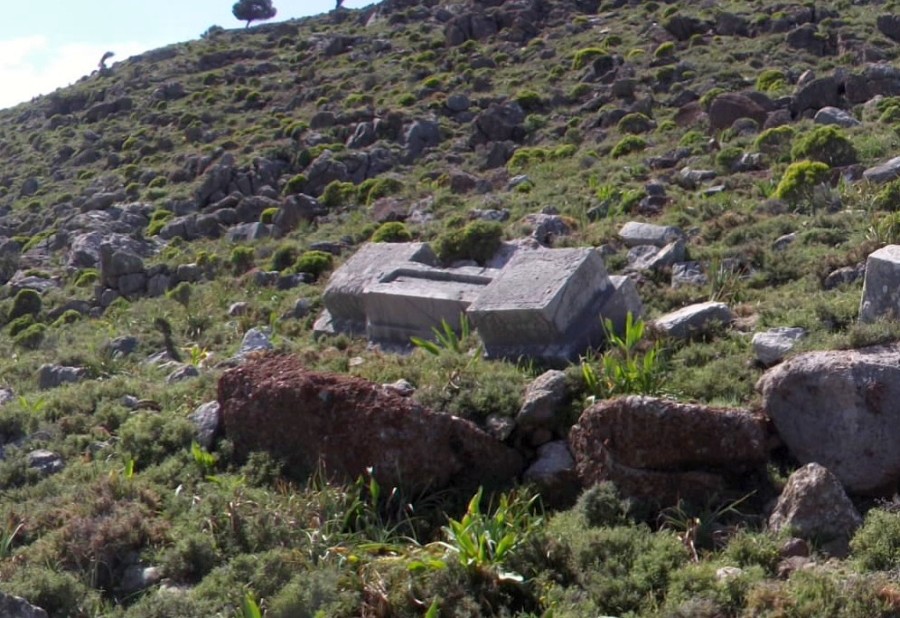 Fig. 12. Some typical Carian Chersonesian stepped-bases in the necropolis of Loryma

They were, among others, dedicated to Apollo, Artemis Pergaia or Kybele, just to name a few (Fig. 13). All sanctuaries are scarcely preserved and only identified by inscriptions. At the edges of the plains, the ruins of numerous Hellenistic farmsteads can be found. In the plains, the remains of 6 churches from Byzantine times have been preserved. About 800 m northwest of the settlement, lie the remains of an early fortification. 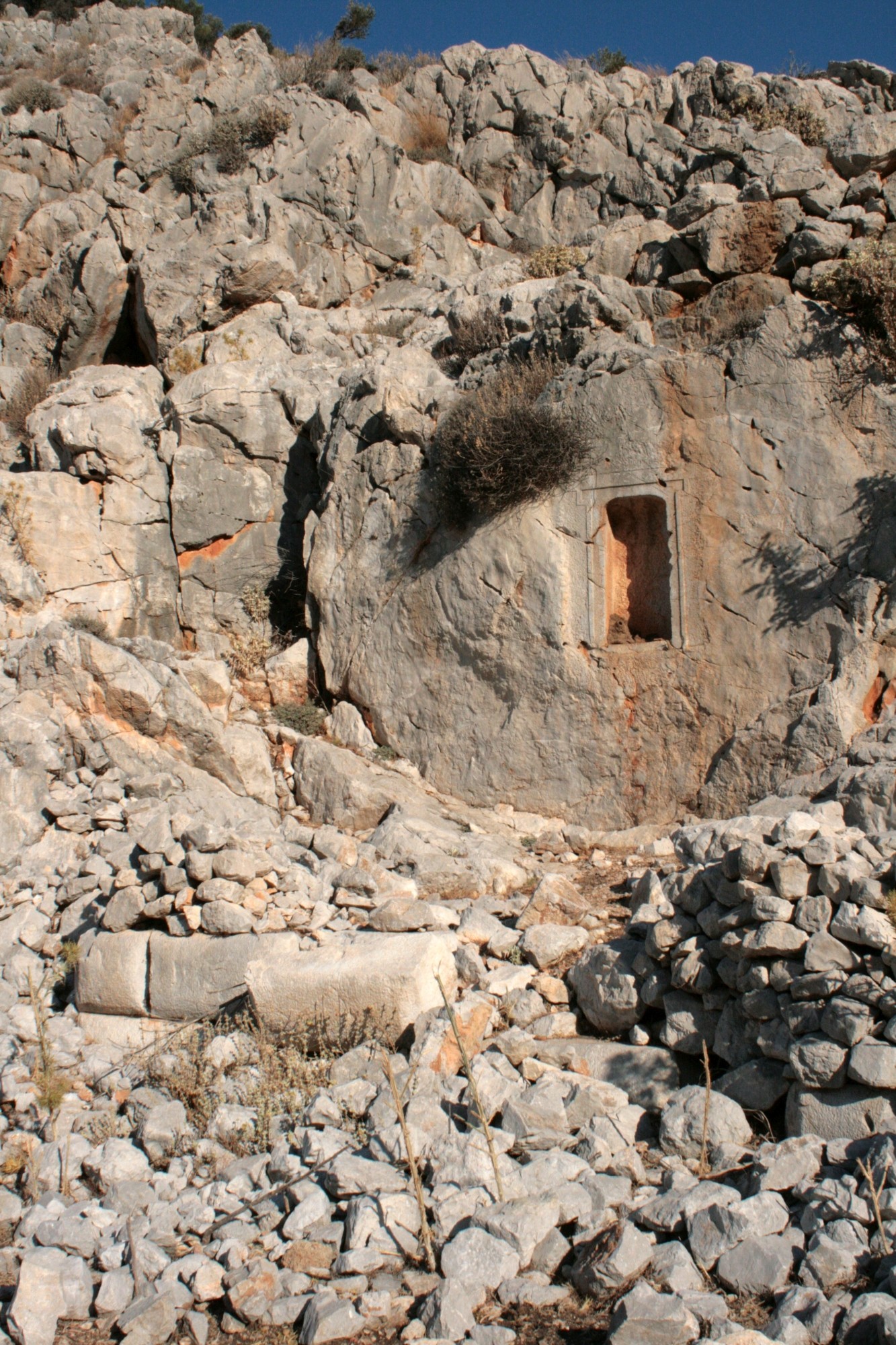 Fig. 13. A rock sanctuary with a niche dedicated to Kybele

The settlement on Asar Dağ: No longer in the immediate area of the bay, but on a mountain called Asar Dağ, about 1.5 km to the northeast of Loryma, there is another settlement. It could not be identified with any of the settlements handed down for the peninsula. The settlement is surrounded by a strong circuit wall; due to its isolated position, it has been preserved up to 4 m high (Fig. 14).

Fig. 14. View of the circuit wall of the settlement on Asar Dağ

As it has not been object of intensive archaeological research, no further information can be provided. From the settlement on Asar Dağ, there is an open view of the surrounding mountains, plateaus and the sea on both sides of the Carian Chersonese (Fig. 15). 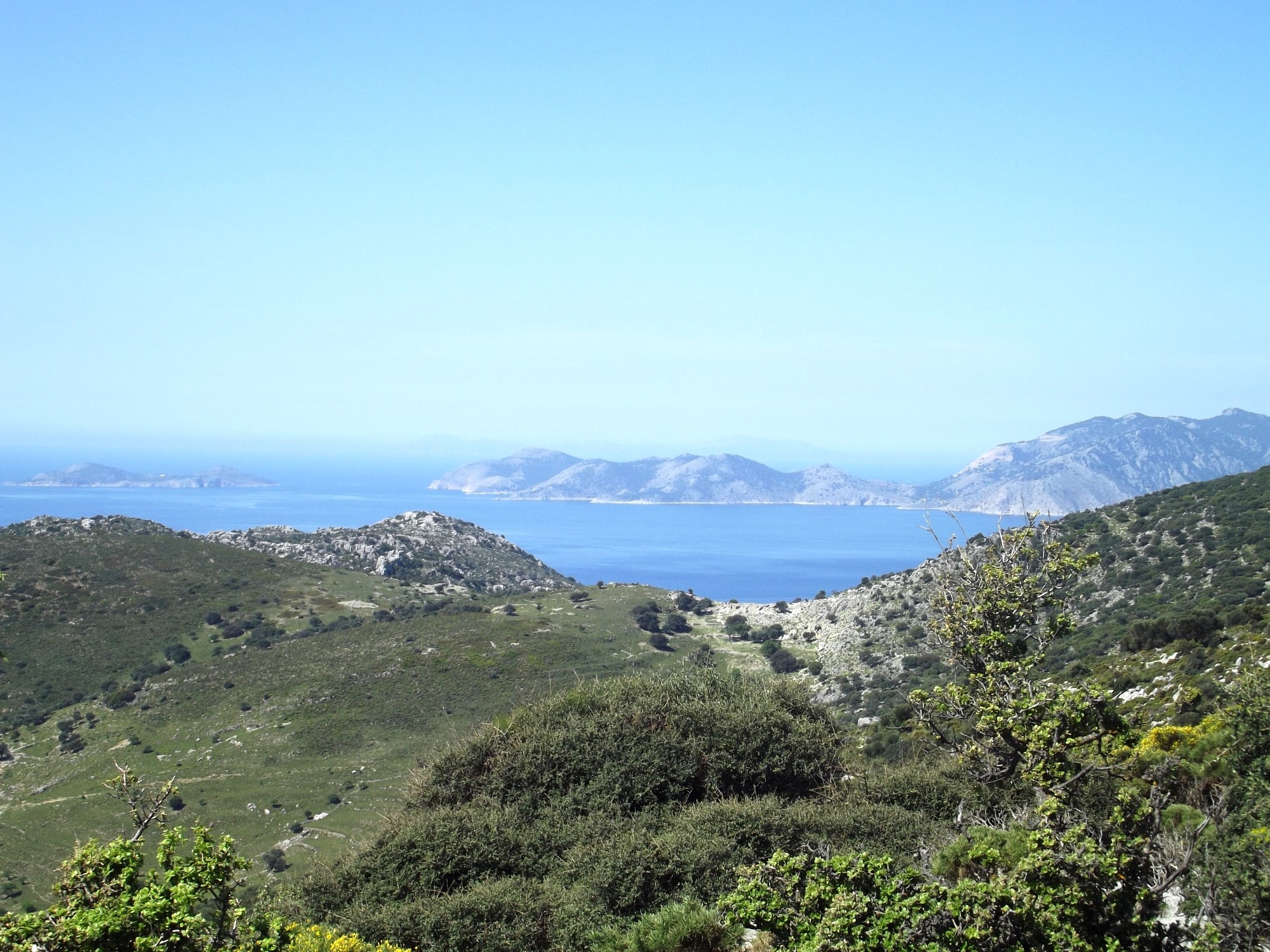 Fig. 15. View from Asar Dağ across the environment with the island of Symi in the background

Due to their isolated setting, the ruins in the bay of Loryma (Bozukkale) are not exploited for tourism.

While the Harbour Fortress and the settlement of Loryma can easily be reached from one of the three restaurants on the shore (the restaurant “Sailor’s House” of Mustafa Şengül lies halfway between the two sites), for the visit of the settlement on Asar Dağ, it is advisable to ask for a local guide.

By boat: The best way to reach the bay of Loryma is by boat. Some of the Gulet tours starting from or getting to Marmaris stop in this bay. Recently, it seems to be possible to get from Serçe Limanı to Loryma by boat in about 30 minutes („Prenses inci boat trip“). However, a rental car or dolmuş are necessary to get to Serçe Limanı.

You can find the closest accommodation in Taşlıca which lies about 10 km as the crow flies north of the bay of Loryma. Other accommodation is available in Söğüt, a further 2 km west of Taşlıca. During sailing season, there is the possibility to camp in the garden of "Sailor's house" or to stay in one of its few wooden huts.