Muradiye Mosque (tr. Muradiye Camii), was erected in the years 1426 - 1436, on the orders of the Sultan Murad II, who gave the building its name. This mosque is distinguished from other mosques of Edirne because of the tiles that decorate the mihrab and the walls of the prayer hall.

Originally, the Sultan intended to build the quarters (zaviye) for members of the religious fraternity of Mevlevi dervish order, also known as the Whirling Dervishes. The sultan was inspired by a dream in which the founder of the Mevlevi order - Jalāl ad-Dīn Muhammad Rūmī, known simply as Rumi - asked him to erect a place of worship and shelter for his brotherhood. However, later in his reign the Sultan changed the original design, transformed the building into a mosque, and moved the dervishes to another building (tekke), now vanished, in a nearby garden. The mosque complex also included a soup kitchen (imaret) and an elementary school (mekteb), but these buildings have not been preserved to our times. 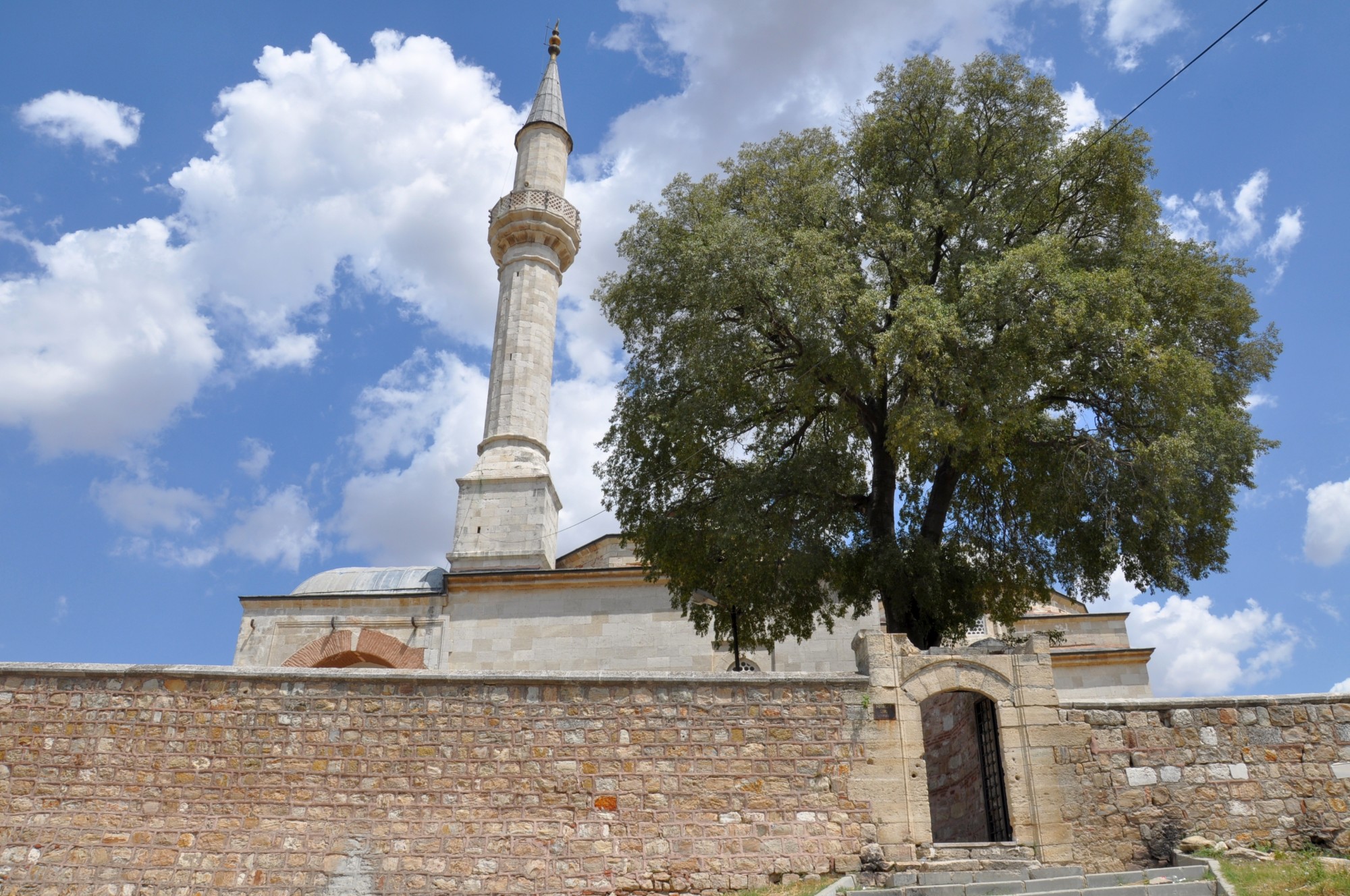 The architecture of the mosque brings to mind the famous Green Mosque (tr. Yeşil Cami) from Bursa. Muradiye Mosque was erected on a T-shaped plan. It is preceded by a five-bay portico in front and two entrance halls (eyvans) covered with domes on both sides. The dome is separated from the entrance hall by a solid arch. The dome of the main prayer room is supported on a band of Turkish triangles. Its original oculus (i.e. a hole in the top of the dome) has been replaced with a lantern.

The mosque was severely damaged by numerous earthquakes. For this reason, the original minaret, adorned with decorative tiles, has not been preserved. The stone structure that can be seen today is from 1957.

The main hall of the mosque is lined with glazed tiles and decorated with frescoes, which have survived only in fragments. Most of the tiles visible on the walls are hexagonal, decorated with unique patterns in white and blue. They are interwoven with triangular tiles in turquoise colour. Unfortunately, some of the tiles were stolen in 2001, and the gaps have been filled with plaster. 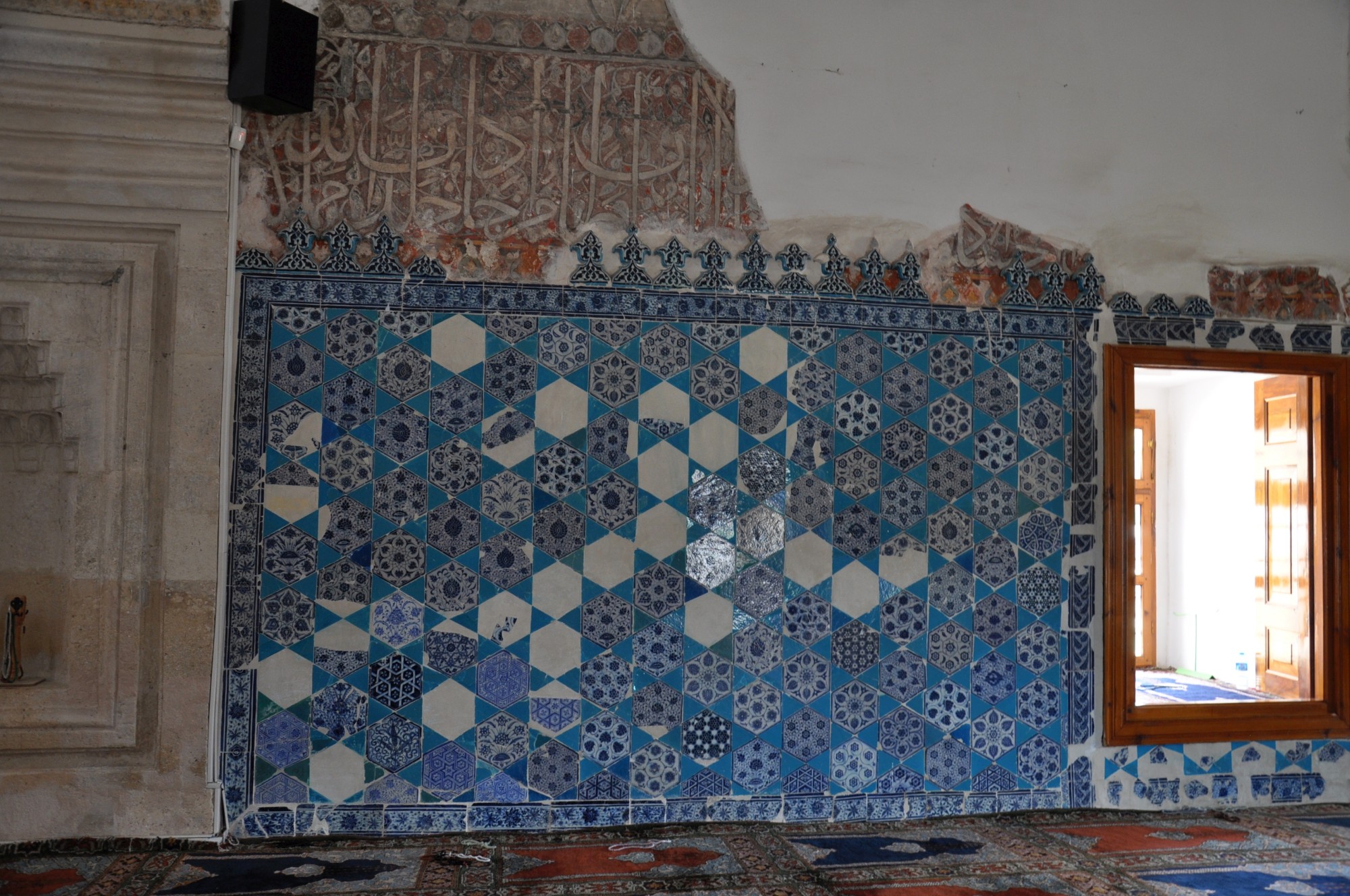 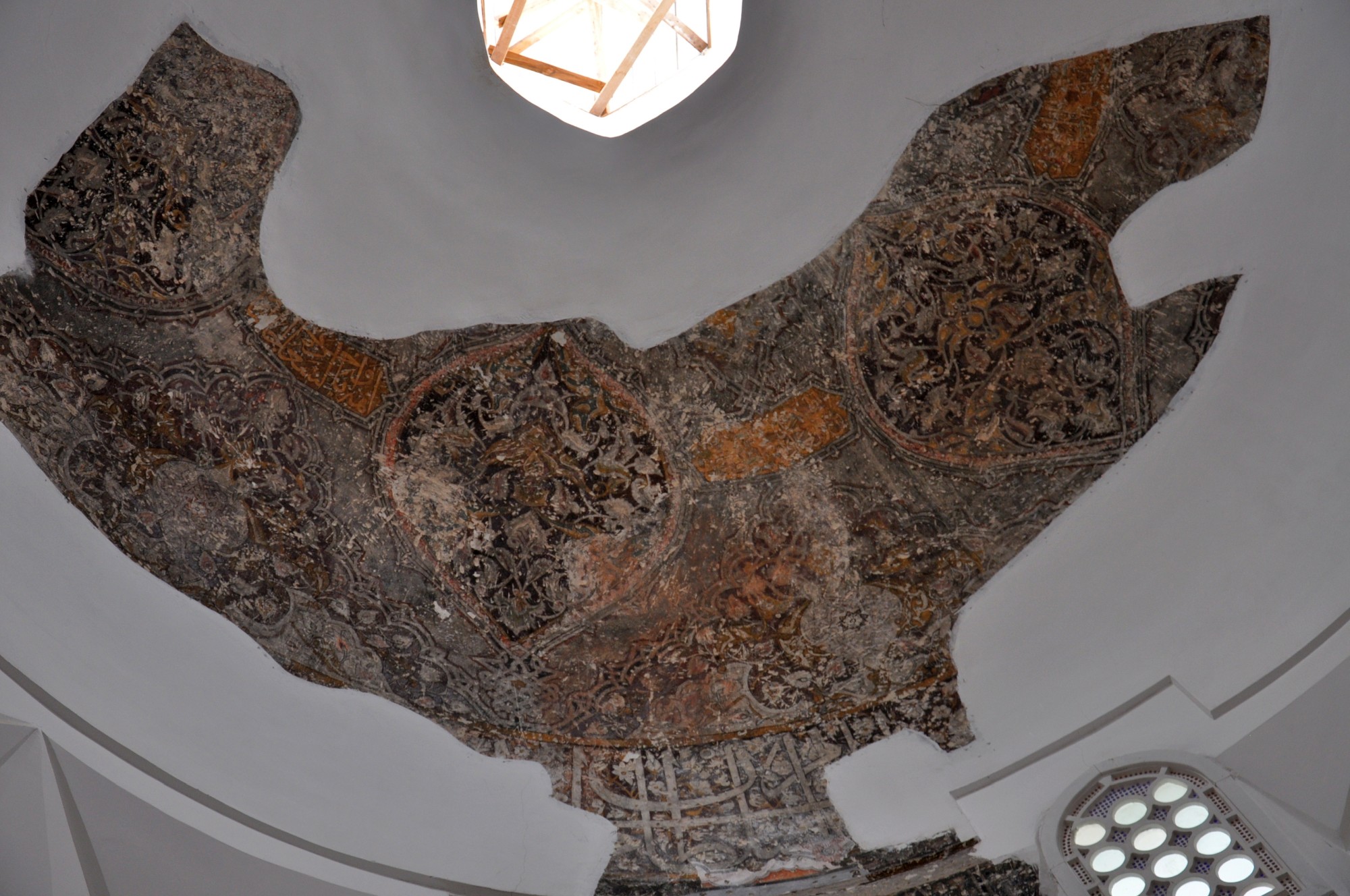 The mihrab, like the walls, is decorated with 15th-century tiles, from the first period of Iznik ceramics. The tiles of the mihrab include inscriptions from the Quran, and a dedication to the Sultan Murad II, as well as floral and geometric patterns. Notably, the blue-and-white hexagonal tiles in the Muradiye Mosque are the earliest known example of underglaze painted tiles produced in the Ottoman Empire. 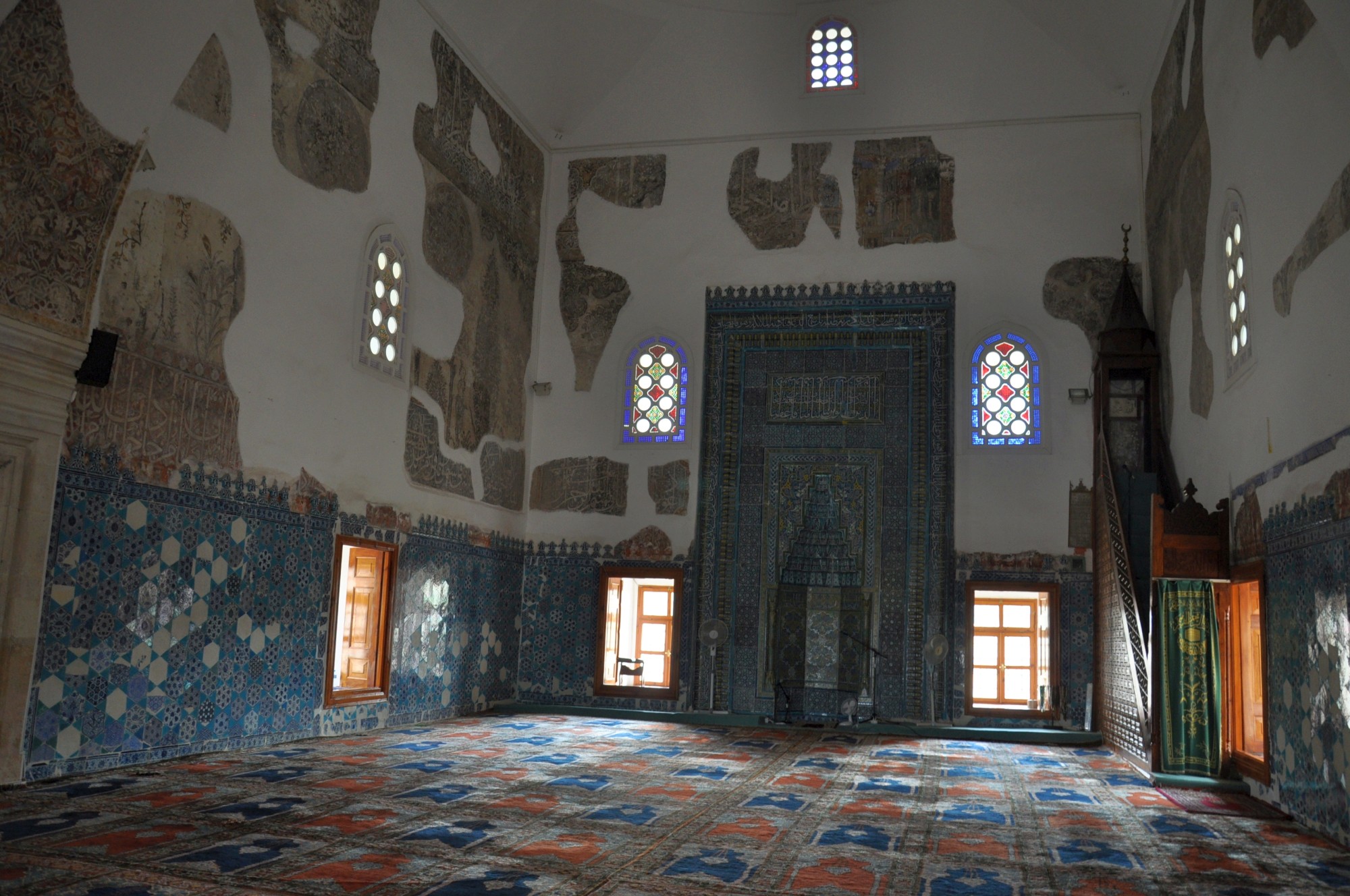 The tilework of the mihrab bears a striking resemblance to the mihrab of the Green Mosque, built in 1419-21 in Bursa. For this reason, some researchers claim that the tiles were produced by the same team of craftsmen. The workers in Bursa signed the mihrab as "the work of the masters of Tabriz". Therefore it is probable that these masters also worked in the Muradiye Mosque. Moreover, they also produced the underglaze painted lunette panels of the Üç Şerefeli Mosque in Edirne.

The wall tiles are placed in a rather haphazard manner, without a coherent pattern, and two different styles of rectangular border tiles are visible. Moreover, the spectacular mihrab is unusually large for the size of the mosque. For these two reasons, the art historian John Carswell suggests that these elements had been originally made for another building, most possibly the Saray-ı Cedid-i Amire Palace, on the plain below.

The exterior front wall of the Muradiye Mosque is decorated with huge calligraphic inscriptions. This style of decoration brings to mind the similar calligraphies placed on the outside wall of the Old Mosque in the centre of Edirne, erected a bit earlier, in the early 15th century.

On the east side of the building, there is a large courtyard that became a big cemetery. It is the burial place of Musa Kazım Efendi. He was the last Şeyhülislam - the chief Islamic judge of the Ottoman Empire who left Istanbul during the British occupation after the First World War. He died in Edirne in 1920 and was buried next to the Muradiye Mosque.

Another tomb belongs to Neşati, a famous poet who lived in the 17th century. He was an Islamic mystic of the Mevlevi Order. His poetry is considered exemplary of the "Indian style" of Ottoman poetry which flourished at the beginning of the 17th century. Neşati was born in Edirne but later went to Konya where he served at the tomb of Jalal ad-Din Muhammad Rumi — the founder of the Mevlevi order. Finally, around 1670, he returned to Edirne as the sheikh of the Muradiyye Mevlevihane. When he died in 1674, he was buried in the courtyard of the Muradiye Mosque.

Moreover, there are around 500 Ottoman-period gravestones on this graveyard. Some of them represent the best examples of Melveli tombs with long headgears. The other gravestones belong to different classes of Edirne society and high bureaucrats of the Edirne Palace. 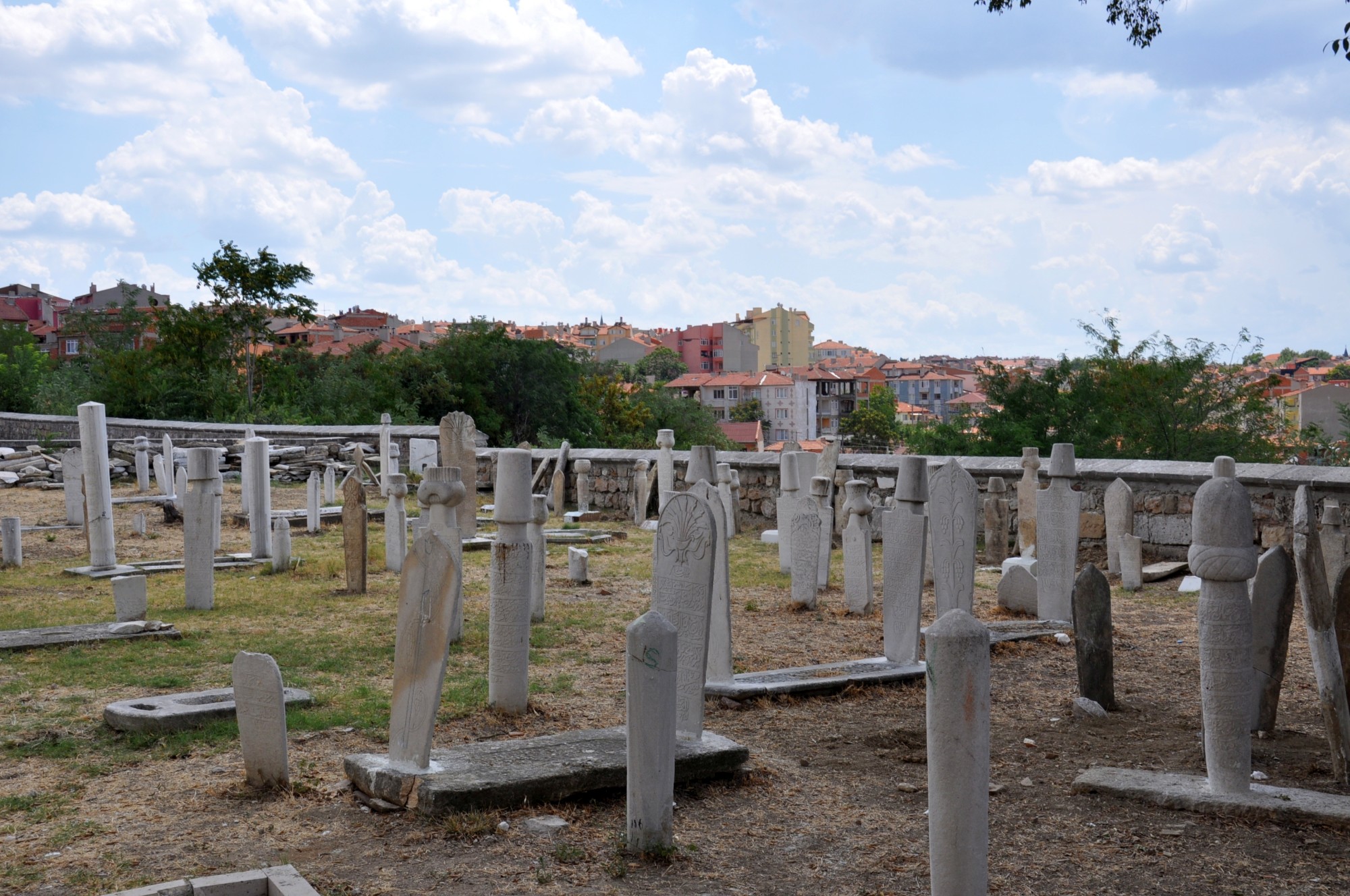 The hill where Muradiye Mosque is situated offers stunning panoramas of Edirne, including the view of the Selimiye Mosque.

Muradiye Mosque is located on a hill on the north-eastern side of Edirne. It can be reached by a 15-minute walk from Selimiye Mosque along Mimar Sinan street.