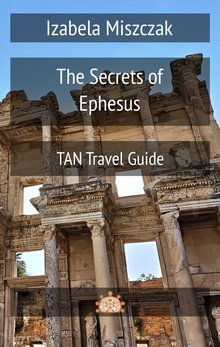 Many travellers dream of visiting an ancient city that has been preserved not only in the form of modest ruins. Would it not be so much more exciting the see such a city in its glory or at least in the state that would echo the magnificent past of the place? While many experienced tourists can point to Pompeii in Italy as such a city, there is also another great location where history is still alive. Ephesus, the pearl of eastern Mediterranean, is a perfect demonstration of the ostentatious wealth of the Greek settlements on the shores of Asia Minor. While Pompeii was erected mainly of bricks, Ephesus shocks the visitors even today with the generous application of the best and most expensive construction materials, including many variations of marble.

Naturally, such a splendid archaeological site as Ephesus receives thousands of visitors daily, and it may seem that it does not hold any secrets from them. Millions of photos are taken there every year and then appear in books, leaflets, websites, and social media channels. Can we hope to discover something not published on Facebook or Instagram there? Is it possible to find a peaceful and quiet corner or see the grand theatre and the lavishly decorated Library of Celsus without the crowds? This book has been prepared with the hope to assist all of the readers ready to find out more than can be learned about Ephesus from popular guidebooks and information boards.

The aim of this book is not only to take the visitors from one location to another, but also to provide them with more information and question the truth of some commonly repeated statements. Was the small building on Curetes Street really the Temple of Hadrian? Did St. John write the Book of Revelation during his stay in Ephesus? Are the statues adorning the Library of Celsus the portraits of the four virtues of the founder? Who lived in the famous Terrace Houses? Finally, did Mary, the mother of Jesus, live her final years in the city? This book will provide the answers to these and many more questions.

During the journey that this guidebook has planned for its readers, they will visit not only the archaeological site of Ephesus, but also other sights situated nearby. The necropoles of the city have been presented here, including the famous Grotto of Seven Sleepers and the cemetery of gladiators that revealed many details about the lives and deaths of these ancient entertainers. The travellers will also join the pilgrims who have arrived at Ephesus since the times unknown, first to worship the Anatolian Mother Goddess, and then her Hellenised version known as Artemis Ephesia whose sanctuary at Ephesus used to be one of the Seven Wonders of the World. The religious aura of Ephesus did not vanish with the end of antiquity, but has attracted Christian pilgrims for almost two millennia.

The final part of this guidebook is devoted to the modest town of Selçuk that has inherited the rich history of ancient Ephesus. The treasures from the past are displayed in the Ephesus Museum located in the town, but it has its share of tourists attractions, too. Towering about the town, there is a hill called Ayasuluk with the imposing fortress that once protected the Basilica of St. John and the grave of this saint. Finally, the book will show you the Eastern Roman heritage of the town and its monuments from the first century of the Turkish rule. This period of history - the 14th century - was the last era of the city's great prosperity. Now, it is high time to re-discover Ephesus and walk off the beaten tourist trail, and this guidebook will assist you in this quest.

"The Secrets of Ephesus. TAN Travel Guide" is available from Amazon in paperback and Kindle versions as well as an ebook from Google Books.