The tale of mighty Troy has tempted the travellers for thousands of years. The tragic fate of the powerful city of King Priam, sung by the semi-legendary bard called Homer, has been one of the most frequently retold dramas of all times. Even in the ancient times, when Asia Minor was colonised by the Greeks and later controlled by the Romans, the site of Troy was a great tourist attraction. When visiting this World Heritage Site, you will be following in the footsteps of the Persian ruler Xerxes, Alexander the Great of Macedonia, Roman Emperor Hadrian, and the Ottoman Sultan Mehmed II the Conqueror. 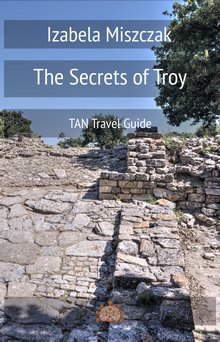 Even if it is difficult to say with certainty that the archaeological site first excavated in the 19th century is the location of the Trojan War, the visit here brings many emotions and evokes the scenes from the Homer's story. By following this guidebook, you will be able to imagine brave Achilles chasing the Trojan prince Hector around the mighty fortifications of Troy. The book will also help you to understand the geography of the site and the surrounding countryside. On a bright day, you will see the remote Aegean Islands where the Greek ships had been hidden before the fall of the city. Looking in another direction, you will glimpse the distant outlines of Mount Ida - the favourite location of the Olympian gods who had played with the mythical heroes' fates like a game of chess.

Moreover, this guidebook offers you a tour of the archaeological site that is, admittedly, quite difficult to understand with its multiple layers. All significant locations are described in great detail to add more satisfaction to the experience. Before you come to Troy, make sure to read the chapters devoted to the site's archaeology and history. Finally, the newly opened Troy Museum, located not far from the site, has been thoroughly presented in this book and you might want to visit it before taking a tour of the site.

In this guidebook you will find a detailed plan of the site of Troy, showing all the main stops of the tour. The map of the region of Troad will assist you in putting Troy in the wider geographical context. It should be also helpful during the visit to the Troy Museum where the presented exhibits include not only the objects from Troy, but also from other nearby sites. The book provides practical information for the visitors such as ticket prices and opening hours as well as the transportation options from the city of Çanakkale. If all of this is not enough, there is a bibliography to satisfy the needs of the most inquiring readers.

"The Secrets of Troy. TAN Travel Guide" is available from Amazon in paperback and Kindle versions as well as an ebook from Google Books.