While walking the streets of the old district of Edirne, it is easy to reach Maarif Street. There, at its southern end stands the newly restored building of the Grand Synagogue of Edirne (tr. Edirne Büyük Sinagogu). The fate of this building reflects the turbulent history of the Jewish community of Edirne, once very numerous, and now almost non-existent.

An outline of the history of the Jewish community in Edirne

The first information about a Jewish settlement in this area dates back to the Byzantine period. In the city, then called Adrianople, a Jewish community was active mainly in the textile, leather, and wine industries. After the conquest of the town by the Turks in 1361, many immigrants settled in Edirne. These new inhabitants included a large number of Jews from the newly acquired Ottoman territories in the Balkans. The Jewish community increased because of immigrants from Hungary who were exiled from that country in 1376, and from France, after 1394.

After 1492, there was an influx of Jews exiled from Spain by the Catholic rulers of the kingdom. Soon afterwards, more refugees arrived from Portugal and Italy. This new wave of immigrants had particular customs that distinguished them from the Balkan Jews who had lived in Edirne for a long time. New religious communities, called qahals, were established on the basis of the geographical origin of their members. By the middle of the 17th century, there were 15 such qahals in Edirne. It is also known that at the beginning of the 18th century, the Jewish community in Edirne had about 5,000 people.

The nineteenth-century reforms carried out in the Ottoman Empire, known as tanzimat, led to the emergence of a new class of non-Muslim bourgeoisie. In Edirne, the Jewish economic elite consisted of merchants and bankers. Unfortunately, the 19th century also brought the deterioration of the relations between the Jews and their Christian neighbours. The growing inter-religious tension led to the persecution of the Jews by the Armenians in 1871-1872. At that time, the Jewish community of the city had around 12,000 people.

The nationalist movements that were developing in the Balkans in the 19th century proved to be a greater threat to the Jews. As a result of the influx of Jewish refugees from the newly formed Balkan states, the Jewish community in Edirne systematically grew, reaching in 1907 the size of nearly 24,000 people. This population lived in different districts of the city, depending on their occupation. Each local community had its internal organisation, its synagogue, and a rabbi under the general supervision of the city's chief rabbi.

During the Balkan Wars, Edirne was temporarily occupied by Bulgarian troops, and a large part of the local Jewish community sought shelter in Istanbul. Just before the outbreak of the First World War, about 28,000 Jews were living in Edirne, but after the war, their numbers gradually declined to reach just 2,000 in 1943. This rapid decline can be explained by first changing the status of Edirne, which became a border town, depleted by wars. Many Jews emigrated to Thessaloniki in Greece as well as to France, the United States, and later to Palestine.

Another important reason for the decline of the Jewish community was the fall of the Ottoman Empire and the creation of the Turkish Republic. In the early years of its existence, all national and religious minorities were subjected to a great deal of linguistic and cultural assimilation with the majority of Turkish society. This pressure was mainly felt by the Jews of Thrace because of their inhabitation in the borderland area, and because the Jews were the only non-Muslim minority there after the exchange of the population with Greece. Edirne Jews faced verbal threats, and, less often, physical attacks. Moreover, they suffered from the legal restrictions imposed on their businesses.

The apogee of the persecution of the Jews in the eastern part of Thrace came in 1934, and the local Turkish press played a significant role in the escalation of violence. The crowd gathered in Edirne attacked the members of the Jewish community. The threats and attacks sparked panic. Despite government intervention and security guarantees, thousands of Jews permanently moved to Istanbul.

Further blows to the local community were: forced recruitment to the so-called work battalions and a discriminatory minority property tax, imposed in 1942. This tax was calculated at different heights for the Muslims and representatives of other religions. In addition, it was especially harmful to national and religious minorities involved in running a business as it was much higher taxed than in the case of agricultural activities.

As a result of these events, less than 3 thousand Jews lived in Edirne in 1948, in 1960 their number fell to 438, and in 1977 - to 72 people. They emigrated massively to the United States, Canada, and Israel. In the 70s of the 20th century, most Jewish institutions no longer functioned, and only one synagogue still served their religious needs. Moreover, in 1971 the town administration banned the Jewish community from using its cemetery, which was confiscated and destroyed in 1975. The Grand Synagogue of Edirne continued to function as a place of worship until 1983. In 1998, only 3 Jews lived in Edirne.

Grand Synagogue of Edirne was erected after the great fire of 1905. During this disaster, all the 13 synagogues of Edirne were burned to the ground. The Jewish community started building a new synagogue in January 1906 after getting the permission of the Ottoman Government and the edict of Sultan Abdul Hamid II.

The new synagogue was modelled on the famous Leopoldstädter Tempel - the largest synagogue of Vienna - as it was designated to demonstrate the community's achievements and modernity. Grand Synagogue of Edirne was designed by the French architect France Depré in the architectural style of Moorish Revival. The location of the new synagogue was the site of the ruined synagogues Mayor and Pulya in Suriçi neighbourhood.

The construction costs were 1,200 gold coins. The synagogue was opened to service on the eve of Pesach (Passover) in April 1909. The building could accommodate 1,200 worshipers – 900 men and 300 women.

Due to the emigration of the Jewish community, the synagogue ceased to operate in 1983. In 1997, because of the lack of interest in the fate of this building, its roof and one of the walls collapsed. 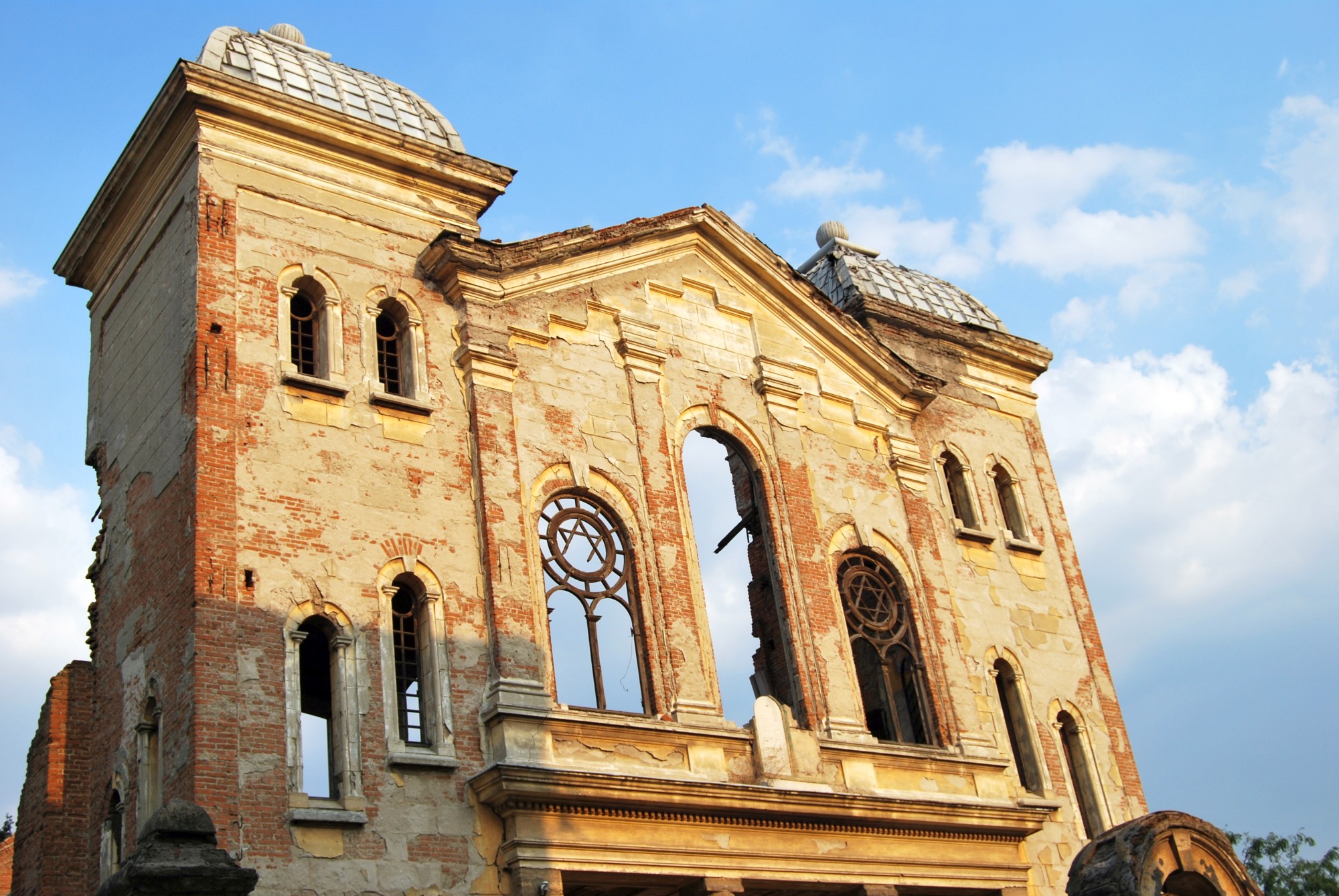 In 2008, the mayor of Edirne Mustafa Büyük announced a plan to rebuild the synagogue building and restore its former splendour. In his speech, the mayor stated that the reopening of places of worship of different religions would bring Edirne cultural richness, and after the restoration of two Christian churches, it was time for the synagogue. Mustafa Büyük also expressed the belief that children and grandchildren of Edirne Jews would come to this city to visit the restored synagogue. His words were confirmed by Israeli consul Mordehai Amihai, whose grandfather once lived in Edirne.

Sadly, at the end of 2008, Turkish-Israeli relations were rapidly deteriorated due to Israel's Operation Cast Lead, also known the Gaza War. The events of 2010, commonly referred to as the Incident of the Gaza Strip, deepened the political conflict between Turkey and Israel. Despite this drastic cooling of relations with Israel, the renovation of the synagogue in Edirne was progressing gradually, although in 2011-2012 there was a stagnation of repair work. 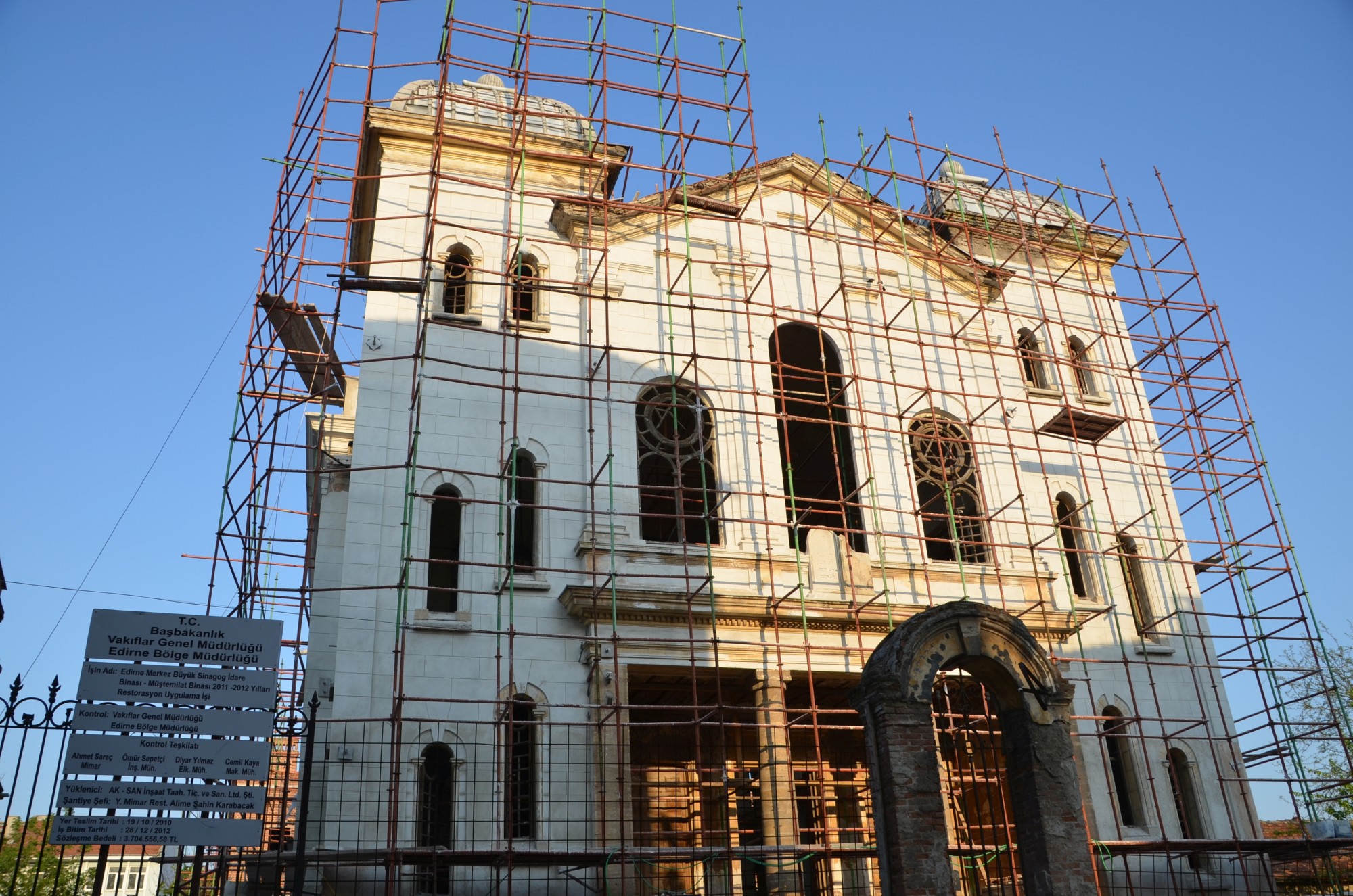 In March 2013, Israel officially apologised for the 2010 incident, which opened the way for normalisation of the relations with Turkey. One of the visible effects was the accelerated reconstruction of the Great Synagogue in Edirne.

The reconstruction of the synagogue lasted five years and cost 5,75 million Turkish lira, i.e. approximately US$2.5 million. The investment repaired the lead-clad domes, the collapsed roof and walls. The foundations were fortified, and the floor inside was restored to its original patterns and colours, as well as the Torah inscriptions. The restoration was overseen by Turkey's General Directorate of Foundations. The restored synagogue is claimed to be the largest one in the Balkans and the third largest in Europe. 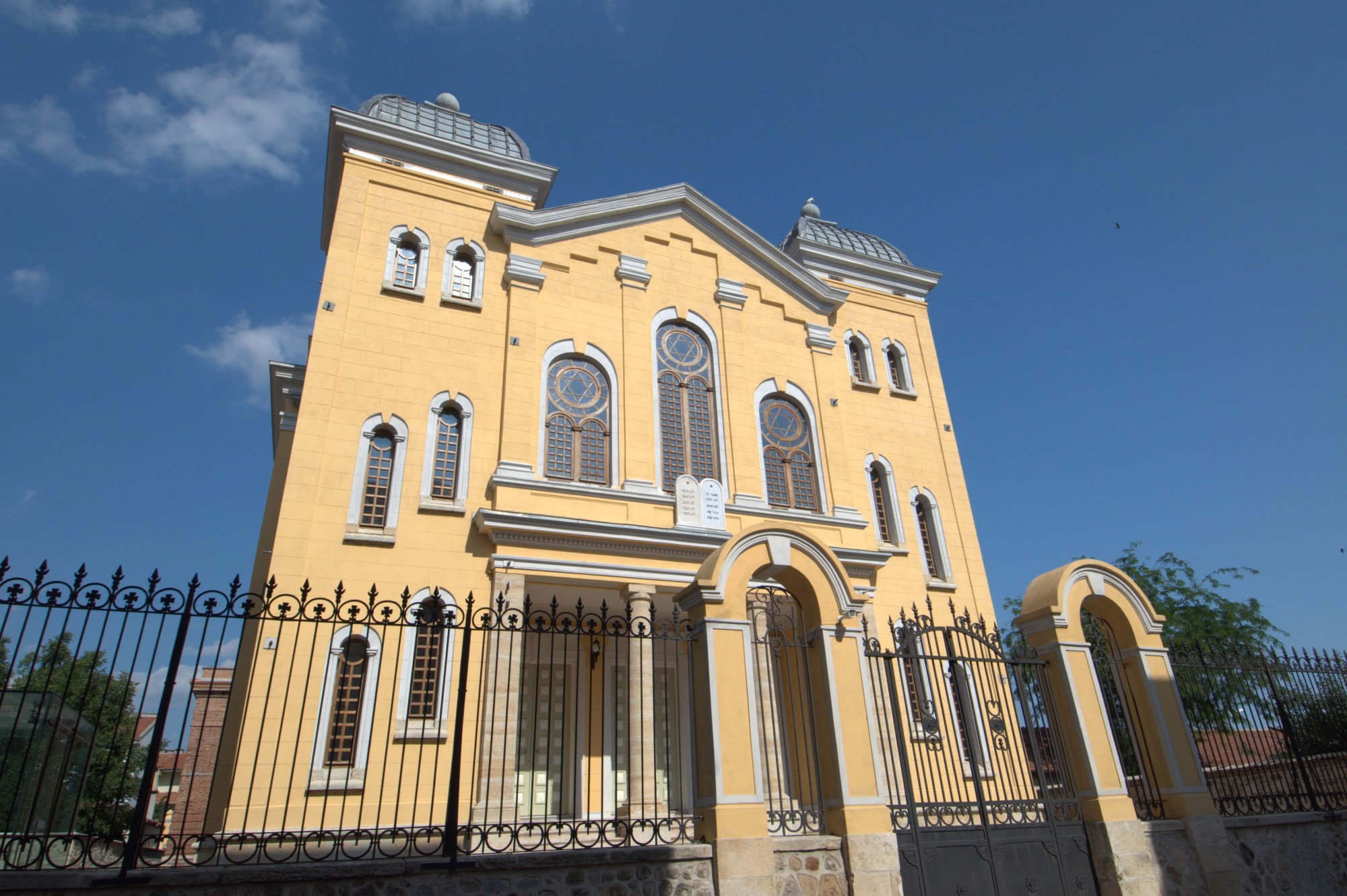 Finally, the synagogue was reopened on March 26, 2015. There was an official celebration and a morning prayer service, attended by around 500 members of the Turkish Jewish community, including Ishak Ibrahimzadeh, leader of the Jewish Community in Turkey. The worship was overseen by Rabbi David Azuz, who had led the service on the closing day 36 years before. Turkish authorities were represented by Bülent Arınç, Deputy Prime Minister. He expressed hope that the restoration of Grand Synagogue of Edirne should become a symbol of the coexistence of different religious communities on Turkish territory. The Municipality of Edirne greeted the guests with a banner saying "Welcome home, our old neighbours."

Grand Synagogue of Edirne has been renovated, but it is not open for visitors, so it is only possible to admire it from the outside.

More information about the history of the Jewish community from Edirne can be found in the Jewish Virtual Library.

If you are interested in the policy of the Turkish government towards national and religious minorities during the Second World War, you will find more information in Bernard Lewis's book The Emergence of Modern Turkey.

Grand Synagogue of Edirne is situated in Kaleiçi District, near the southern end of Maarif Street. The distance from Selimiye Mosque is 1300 meters, and the easiest way to get there is by walking along pedestrianised Saraçlar Street.

Christians and Jews in the Ottoman Empire
Jewish Life in Turkey in the XVIth Century: As Reflected in the Legal Writings of Samuel De Medina
Jews, Turks, and Ottomans: A Shared History, Fifteenth Through the Twentieth Century
The Emergence of Modern Turkey
The Jews of the Ottoman Empire and the Turkish Republic
Turkey’s Jews and their Immigration to Israel
A Short Survey of the Literature of Rabbinical and Mediæval Judaism
The Jews of Byzantium 1204-1453
Travels in Yemen : an account of Joseph Halévy's journey to Najran in the year 1870